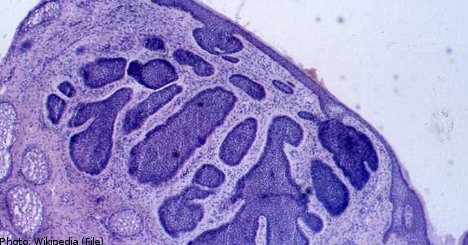 The breakthrough discovery came from an international study in which 104 patients from several countries participated, and was presented at the European Cancer Conference held in Stockholm on Saturday.

Basal cell carcinoma is the most common form of skin cancer in Sweden. In most cases the tumors are benign, but in a smaller group the tumors grow into the surrounding tissue, such as eyes, nose and pharynx.

“The disease can also spread to the lungs, lymph nodes, liver, and skeleton, and can be directly life-threatening,” wrote the cancer conference in a statement.

The capsule used in the study finds the tumor and there blocks the signal pathways in the cancerous cells. This inhibits the uncontrolled cell division.

In the study, scientists discovered a significant shrinkage of the tumors’ sizes in 43 percent of patients with a locally advanced disease. For those whose cancer had spread to internal organs, the cancer shrunk in 30 percent of patients.

A clear size decrease could be observed after as little as four weeks.

By rapidly initiating this tumor-shrinking treatment, the possibility of successfully removing the tumor surgically is also increased.