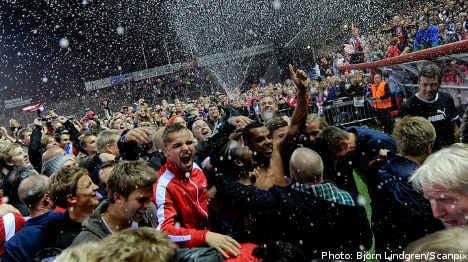 Reports of drunkenness were widespread as crowds gathered outside the Grand Hotell in the city in an impromptu party. Police made arrests for drunken behaviour while many were barred from the area as the celebrations started to get out of hand until appeals from the players soothed the situation.

Several players took part in discussions with supporters together with the police which helped to calm things down,” said duty police chief Magnus Lefèvre.

Helsingborg secured the Swedish Premier League title ironically with a little help from their bitter rival Malmö FF. The champions elect were in a great position having won their game 3-1 at Gais, but needed their neighbours to do them a favour by taking points from AIK.

Malmö duly obliged by scoring an equaliser in the dying seconds of the game at Råsunda in a 1-1 draw, giving the title to Helsingborg. The team were on their way back on the coach when they heard the news, promoting wild celebrations which were to be the start of a long evening in Skåne.

Fans gathered first at the club’s home stadium Olympia to greet the players, and then later on the party started in town as thousands took to the streets to celebrate.

In the end a few arrests were made for drunken behaviour as police battled to keep a lid on further outbreaks and although the party went on late into the night, things eventually calmed down as crowds finally dissipated.