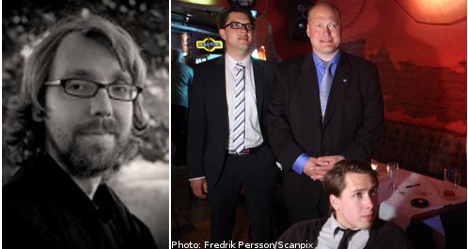 “Of course it is a setback for the party,” Johansson Heinö, a political scientist at Gothenburg University and author of the report “Integration or assimilation”, told The Local on Monday.

Johansson Heinö argued however that the Sweden Democrats have held together well during their first year in parliament and have the capacity to withstand the current crisis of confidence.

“One of the strengths of the Sweden Democrats is that they have held together in the parliament with a high degree of unity. This is their first setback and I think they can afford it. They have a good starting point.”

Johansson Heinö continued to warn that the situation can’t be allowed to spiral out of control and underlined the importance of the party staying united.

“It has to be a unique incident. This is apparently not a consequence of ideology or policy, it concerns personal issues – that is why it is possible to regard it as unique.”

William Petzäll is 23-years-old and prior to Monday’s decision represented the party in Dalarna. His decision to leave the party and remain as an independent means that the Sweden Democrats’ Riksdag group declines from 20 to 19 members.

“They had 20 before, now they have 19. In order to use their position as kingmaker in parliament, this means that the margins are even slimmer. It is a bad day for the party,” Johansson Heinö said.

The Moderate party on Monday reported that Petzäll had been in contact a month ago to inform them of his plans to leave the Sweden Democrats.

The party confirmed that his overtures were declined and Johansson Heinö predicts a lonely time for the young MP from Borås.

“It is going to be difficult for him. He is a newcomer, very young and he has not distanced himself from the ideas of the party – no one is going to want to be associated with him.”

“I wonder if he will even last out the parliamentary term.”

Johansson Heinö argued that this year is an important one for the Sweden Democrats, one that has now got off to an inauspicious start in the run up to the party’s national conference in Gothenburg in November.”

“The leadership wants to stress a social conservative ideology and talk less about nationalism, but this has strong opposition among the grassroots. It will be interesting to follow the debate,” he said.

“This year is a real test for them. This is not a good start.”