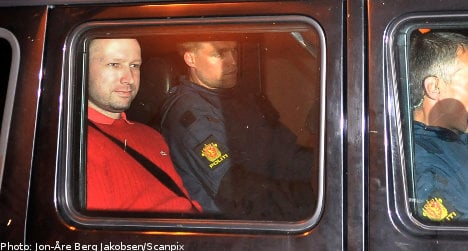 Two men, aged 25 and 26, were charged in Västerås on Friday for attempted murder in connection with attacks on two men of south Asian origin at the end of July.

According to the prosecutor the case concerns a hate crime with the men targeting their victims due to their foreign origin.

Four days after the attacks in Oslo and Utøya which left 77 dead, a man sleeping on a bench in the town of Västerås was attacked. He was seriously injured and was relieved of his mobile phone.

Two days later another man, this time of Sri Lankan origin, was stabbed and seriously injured while completing his paper round.

According to the police report on the case, the accused, who deny the charges, expressed hatred of immigrants in the attack with one screaming “Go home” to the bleeding victim and then pausing to draw a swastika on the man’s bag.

According to the Dagens Nyheter daily the police report details that one of the defendants sent the follow text message to the other shortly after Behring Brevik’s terror attack on July 22nd:

“A Norwegian ‘Nazi’ has killed like, around 84! From the left who, like, cheered on Islam. HAHAHA!! WHITE POWER!”

The men were arrested shortly after the second attack.

A police inspection of computers seized in the defendants homes has revealed pictures of the men raising their arms in a Nazi-style salute in front of the Swedish flag.

Furthermore the men’s internet history showed that they spent time immediately prior to the attack in the early hours of July 28th visiting a racist YouTube channel.