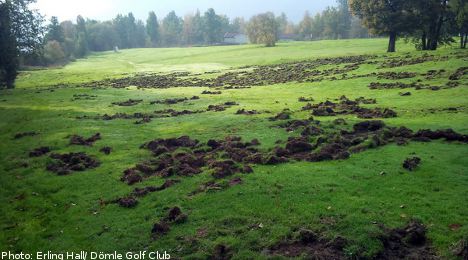 ”We hope that we are rid of them now, that the others were scared off for good,” said Malte Ottosson, chairman of the Dömle Golf Club, to The Local.

The wild boar family, a sow and eight piglets, has been terrorising the fairways for about a week, Ottosson said. In local media it has been speculated on whether they have been placed in the area by hunters, hoping to increase the brood.

All Ottosson knows for sure is that they appeared suddenly and started to cause havoc on the greens.

”They just came out of nowhere and started ruining our fairways,” he said.

And the boars have so far returned every night for a week to forage for food on the club grounds, leaving holes and ditches were before there was only pristine green lawns.

Club members have been called on to muck in and try to patch up the mess as best they’ve been able.

But last night the foraging fun had run its course for two of the eight piglets when they were shot dead by a hunter on the approach to the fifth hole.

The whole thing ”took fifteen minutes” according to Ottoson, and it is hoped it will be enough to avoid any more from having to be shot.

”We couldn’t shoot the sow, then we would have had anarchy on our hands,” said Ottosson.

But according to comments made by Ottosson to the local Nya Wermlandstidningen, the boar problem in the area is a ticking bomb.

”We’re going to have a huge problem on our hands, not just on the courses but in people’s gardens,” he said.

In order to preempt the problem the club is now busy erecting electrical fences around the area that has been worst affected by the hungry boars.