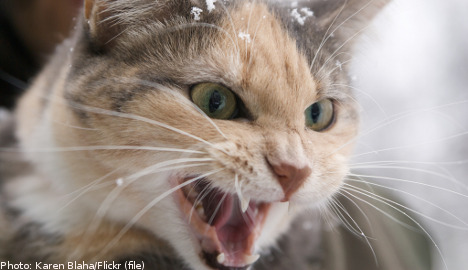 The cat in the picture is not the one mentioned in the article.

”The cat flew at me unprovoked and bit and scratched me all over my body. It hung by its mouth from my arm,” Granström told the local Länstidningen (LT) daily.

Granström tried to defend herself and managed to reach a neighbour who helped her phone the police.

But the emergency services were unwilling to help, advising her instead to clean the gashes and scratches on her arms by herself. This is not a matter for the police, they told the shaking Granström.

”They thought I should make my own way to hospital,” said Granström to LT.

But before she could do that she had to deal with the still furious feline.

The neighbour, who had donned rubber gloves, tried to lure the aggressive animal out from under the bed to where it had retreated hissing and spitting.

When the attempts to entice the cantankerous cat out were unsuccessful, the pair called on the help of some other neighbours, and three men came to their rescue.

“I hid in the bathroom and after the guys had all suffered bites to the arms as well, they finally managed to overpower the cat with a knife and kill it,” said Granström to the paper.