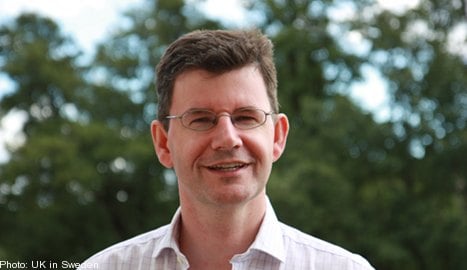 Ambassador Paul Johnston, born in Scotland and educated at Glasgow university, joined the civil service in 1990.

Serving as Second Secretary Political in Paris between 1995 and 1999 he was appointed Head of the Political Section of the UK mission to the UN (UKMIS) New York, in 2005. Johnston returned to London in 2008 as Director of the International Security for the Foreign and Commonwealth Office.

In August 2011 he arrived in Stockholm, to take up the role as ambassador to Sweden.

The Local: You’ve been here since August – how are you liking Sweden so far?

Paul Johnston: Both my wife and I are really enjoying our time here in Sweden. We had been here twice before for long weekends but never realised just how beautiful it was. Since we arrived in August, we’ve gone for bicycle rides on Djurgården, ambled along the streets of Gamla Stan – seeing the sights and enjoying the beautiful environment.

TL: You’ve been posted in cities like NY and Paris, not to mention living in London; can Stockholm really measure up to these?

PJ: We actually think that Stockholm is the best – we have really fallen in love with the city. It is such a mix of a vibrant exciting urban metropolis but at the same time the city is set in such beautiful nature that you are always close to the countryside, in a way you’re not in other big cities.

TL: This is your first posting as ambassador – how does that feel?

PJ: It is both rewarding and challenging to be in charge. Although I have previously headed large departments it has always felt very much as being a small part in a large hierarchy. Although I am again part of a larger hierarchy, being the UK’s representative in Sweden, I do feel that I am heading the ship here in a whole different way.

TL: Is Sweden a good place to serve as an ambassador for the first time?

PJ: Before coming it was made clear to me from many instances what an important partner Sweden is to the UK, not in the least in Europe. We share the same outlook on many issues, we face similar challenges ahead and there is an enormous potential to work together – so I think that it is a very good first posting for me.

TL: You recently met the Swedish King – what was that like?

PJ: It was an honour to meet the Swedish royals. Crown Princess Victoria was also present and I had the opportunity to pass on our Queen’s best wishes on the Princess’s pregnancy.

I had a nice chat with King Carl XVI Gustaf about our similar societies and an issue that remains important for both countries and very close to his heart – the environment. It was a lovely ceremony and a beautiful event. The weather was great too, so whoever was in charge of that, was obviously both well connected and doing a good job.

TL: Is there anything you particularly want to achieve while in Sweden?

PJ: Amongst the things I will be concentrating on while here, is how our two countries can work together within the EU cooperation. Another area of interest is promoting the UK in Sweden while at the same time getting Swedish companies interested in investing in the UK.

Also, exploring possible solutions to shared challenges both countries will be facing in the future, such as climate change and an aging population, is very much on the agenda

TL: What did you know of Sweden before you came here?

PJ: I always thought of Sweden as a country where the countryside was very much in focus. Also I was aware of big brands like Ikea and I had read some of the Stieg Larsson and Henning Mankell’s Wallander books. And of course – I knew of Abba.

On the whole, I think my view of Sweden was very positive – and I was proven right. Some people had told me that Swedes were aloof, but I have found that not to be at all true during the time I have spent here.

TL: Is there any place other than Stockholm you hope to visit while in the country?

PJ: Well, I am certainly hoping to be travelling a great deal within Sweden during my time here. I have been told that next year is supposed to be particularly good for seeing the northern lights, so I am hoping to get a chance to do that. My wife and I are also keen on seeing the Ice Hotel in the north of Sweden.

TL: Autumn and winter in Sweden can be both dark and cold, how are you preparing for that?

PJ: Our Swedish friends have told us that the cold season in Sweden is very much what you make it. If one wears the right clothes and makes the most of it, it is supposed to be enjoyable in its own way.

Also in Sweden there is a term called “mysa”, meaning spending a cosy night in. It so happens that my wife and I have been long term fans of this without knowing that the Swedes had a verb to describe it. So, we’ll probably manage fine.