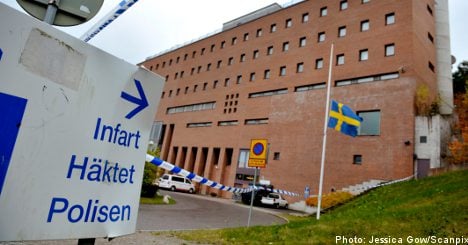 Police received a call shortly before 11am on Monday that the 25-year-old female guard had been severely injured in an altercation with an inmate at the Flemingsberg remand facility south of Stockholm.

Exactly what sparked the fight remains unclear, according to police.

According to the Aftonbladet newspaper, the attack occurred when the prisoners were on their way out to the prison yard for recess.

The paper cited unconfirmed reports that the guard was beaten with her own baton. She was taken to hospital and died less than an hour later.

“A minute ago we received confirmation that she has died. We’re now carrying out an investigation into what actually happened,” Gunilla Terner, regional head for the Swedish Prison and Probation Service (Kriminalvården) in Stockholm, told the Expressen newspaper.

Terner confirmed that the incident occurred in the prison yard, but was unable to say if the guard’s own baton had been used against her in the attack.

“We’re investigating that,” she told the newspaper.

“We’ve heard the same information. But I can’t confirm it.”

The inmate suspected to have carried out the fatal beating has been transferred to another remand facility and police have launched a preliminary investigation into suspected murder.

“I can’t remember a similar case like this and I’ve been working in criminology for 35 years now,” he told the TT news agency

He added that Swedish remand centres are some of the most dangerous workplaces around.

“I can’t emphasise enough how desperate these inmates can be,” he said, pointing out that many of the inmates live under very restrictive conditions and may not have contact with anyone but their lawyers and jail employees.

“Many of them are in very poor mental shape and they are in for long periods of time,” he said.