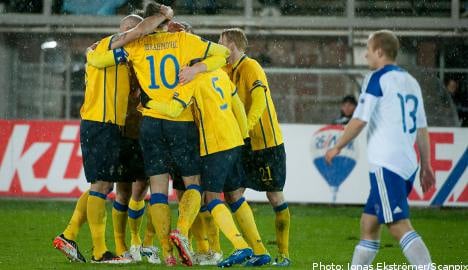 Sebastian Larsson, who plays with English Premier League side Sunderland, opened the scoring after just eight minutes before Blackburn Rovers’ Martin Olsson made it 2-0 in the 51st minute in the Group E encounter.

Joona Toivio pulled one back for Finland after 73 minutes to set up a nervy closing period.

The Netherlands, who play Molodova later, had already made sure of qualifying from Group E with eight wins in eight matches.

Armenia stayed alive in Group B with a 4-1 win over 10-man Macedonia in Yerevan to leave their hopes depending on the result of their clash against the Republic of Ireland in Dublin in Tuesday.

Marcos Pizzelli and Henrik Mkhitaryan gave Vardan Minasyan’s side a 2-0 lead before the interval.

Macedonia captain Velice Sumulikoski was red-carded eight minutes into the second half before Gevorg Ghazaryan made it 3-0. Vance Sikov pulled one back for the visitors but Artur Sarkisov added a fourth for Armenia in injury time.

Armenia have 17 points, the same as Russia who are in Slovakia later Friday, while Ireland, on 15 points, tackle hapless Andorra.

Later Friday, England need just a point against Montenegro in Group G to make sure of their place in the finals in Poland and Ukraine next summer.

France can also go through with a win over Albania in Paris in Group D as long as other results go their way.

As well as the two co-hosts, Germany, Italy, champions Spain and the Netherlands are already assured of places in the finals.