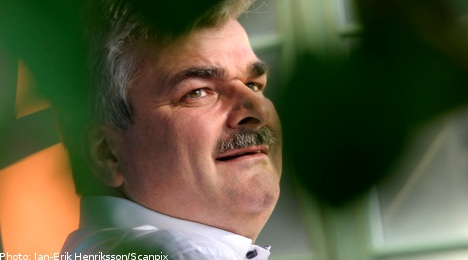 Juholt emerged from a meeting with the party’s MPs on Tuesday afternoon, ahead of a pending party leader debate in the Riksdag on Wednesday, and declined to answer questions on the case which is subject to a criminal investigation.

“There are lot of rumours in circulation. It is good that a preliminary investigation is ongoing as many are disappointed,” Juholt told journalists.

Juholt’s assistant Peter Cervin told the Dagens Industri daily on Tuesday that he informed the Social Democrat leader in August of the discrepancies in the payment for rental accommodation in Stockholm which he shares with his girlfriend.

Since that date Håkan Juholt has submitted a new application for payment to the Riksdag, complete with a demand for the full rent despite the fact that regulations stipulate that he is only entitled to half the amount.

Cervin’s report has however since been disputed by the Social Democrat’s Riksdag office head Sven-Eric Söder, who claimed that he only became party to the information on September 19th, after the new application form had been submitted.

Meanwhile Marianne Bjernbeck at the Riksdag administration claims that she informed both Söder and Cervin during the summer.

After the meeting with the party’s MPs Juholt continued to deny that he deliberately intended to claim funds to which he was not entitled, and argued that he felt a strong support from the party.

Göran Dahlberg, a Social Democrat in Katrineholm in eastern Sweden, called on Tuesday for Juholt to step down.

“I understand this. There have been a number of days of attention surrounding my mistake. I have been certain that I done the right thing. I can understand that such demands are forthcoming,” Juholt said.

“I have a very strong support within the party,” he added.