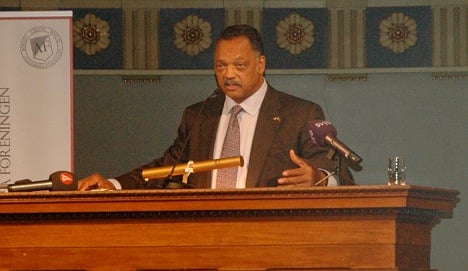 The veteran civil rights campaigner arrived to give his lecture at Lund University in true American political fashion. As he walked down the centre aisle of the large auditorium he grinned, shook hands and waved to the large crowd.

“When you step forward, the whole world stands with you,” Jackson said as he opened his speech.

“One light is enough to challenge darkness.”

Jackson’s interest in the small university city of Lund stems from the “slave auction” incident in April, which garnered international attention.

During a party thrown by two student-run organizations, three students in blackface and ropes were “auctioned off”.

When the incident reached the attention of Jallow Momodou at National Afro-Swedish Association (Afrosvenskarnas riksförbund), a police report was filed. A few days later, Momodou went to work to find a poster of him caricatured as a slave was hung throughout both Lund and nearby Malmö.

The incident prompted Jackson to write a letter to the Swedish government calling for a national response to the incident.

In his address to the Lund student body, Jackson pointed to the Arab Spring and the Occupy Wall Street movements as evidence that change is in the air and stressed that multiculturalism and global unity are inseparable.

During his address, Jackson did not specifically mention the “slave auction” incident.

But he did answer questions about the event during a subsequent Q&A session and elaborated further on the incident at a later press conference.

Jackson explained part of his reason for writing a letter to the Swedish government was to show global unity with Momodou in Lund and felt the incident was a good example of when speaking out is a necessary course of action.

Describing the event itself as “a very distasteful, harmful and hurtful act”, he warned that “there are no slave trade jokes, there is too much hurt”.

According to Jackson, the lesson which can be learned from this incident is to take action. Swedes need to show the society does not accept and tolerate this type of behavior by speaking out.

“It goes against the reputation of Sweden. Swedish people are better than this.” Jackson said.

Jackson warned however that the incident indicated that “something beneath the surface is unsettled,”.

“This is symptomatic of a deeper malady,” he said.

During his three-day visit to Lund, Jackson is scheduled to participate in a series of educational workshops and speeches.

His talk on Wednesday night, at Studentafton, was his first formal introduction to the public and press.

Studentafton is a Lund tradition in which noted speakers from around the world address Swedish students. Previous speakers have included Nobel laureates, comedian Will Ferell and Swedish diplomat Hans Blix.

The speakers are, according to the Studentafton website, not compensated.