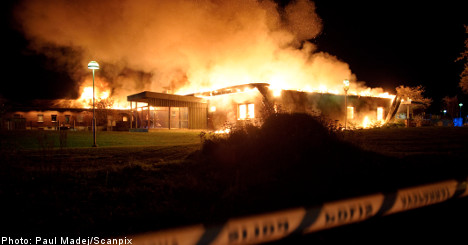 The suspected case of arson has left large parts of the Berga Centrum shopping centre in ruins and prompted local officials to consider offering reward money for tips to help solve a number of recent cases of suspected arson.

Firefighters abandoned the northern section of the mall around 11pm on Wednesday night in order to focus on saving the rest of the complex.

“There was a high risk that things would spread and therefore emergency crews decided to save parts of Berga Centrum that hadn’t already burned,” duty police officer Reinhold Liljedal told the TT news agency.

“The building that was alight was allowed to burn down.”

Massive flames lit up the night sky and thick smoke billowed from the burning building.

Nearby residents escaped the need to evacuate thanks to winds blowing in the opposite direction and no people were injured.

“Work to extinguish the fire will continue into Thursday morning,” said Liljedal.

In recent weeks, a number of containers and waste bins have been set alight in the Berga neighbourhood.

Following the massive mall blaze, officials with Kalmar municipality are now considering offering a reward to people who can help police arrest the suspected arsonist or arsonists.

“This is exactly what we were afraid of. It pisses me off to be woken up in the middle of the night by news that Berga Centrum is burning,” municipal council member Johan Persson told the local Barometern newspaper.

The first call about the fire came in around 10.20pm on Wednesday night with a report of a burning rubbish container behind a pharmacy at the shopping centre.

The flames became so intense that they spread to a building housing stores and a bank, after which the fire spread further via the roof.

Soon thereafter it was clear the building couldn’t be saved. 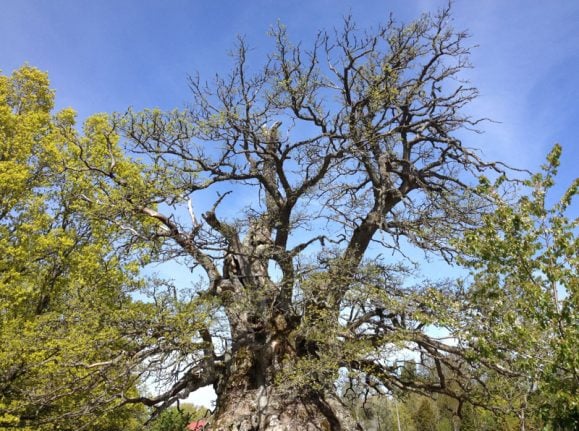 NATURE
Sweden’s ‘oldest tree’ is on the verge of dying
Url copied to clipboard!