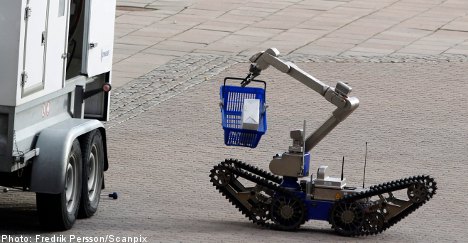 “At 10.55am a phone call came from Rosenbad to the police. They reacted to a package which they had concerns about,” Stockholm police spokesperson Ulf Lindgren told the TT news agency.

According to Lingren, a bomb squad has been dispatched to Rosenbad to inspect the package.

“The team leader on site has decided we should bring in our bomb experts to check things out and see exactly what this is,” said Lindgren.

A source told Aftonbladet the package had “wires and batteries”.

Later police learned that a similar parcel had been delivered to the nearby foreign ministry, and were preparing to block off the area around that building as well.

An area around the entrance to Rosenbad, which houses the office of Prime Minister Fredrik Reinfeldt, has been cordoned off and some parts of the building have been evacuated.

“I don’t know how much, that’s a judgment made in relation to where the object is located,” said Lindgren.

He had no information about what sort of package was at the centre of the scare.

“They do a more thorough checks there than they do at other places. They’ve obviously reacted to something in this package, but I don’t know what exactly,” said Lindgren.

Justice minister Beatrice Ask was in her office at the time and Ask was among those evacuated from the building.

However, hadn’t received any specific information about what had happened.

Reinfeldt, meanwhile, was informed of the incident while he was speaking at an event hosted by the Unionen labour union group in Upplans Väsby north of Stockholm.

During the afternoon, the package was taken away by the bomb squad for further investigation and the cordons around Rosenbad were lifted.

Lindgren said no threats had been received and at least the Rosenbad parcel had been hand delivered and the sender was known, which indicated there was little chance the contents were actually dangerous.

“But all such items need to be treated as dangerous until the opposite has been proven,” he stressed.

He could not say where the packages came from or if they were from the same sender, but a report from daily Expressen’s online edition hinted at an interesting twist: at least one could be a gift from Uruguay’s visiting president, Jose Mujica.

The packages were distributed during a meeting with trade minister Ewa Björling, in violation of security procedures.

When the packages were then scanned on Thursday, they were revealed to contain electronic devices, prompting the bomb scare, Expressen reported.