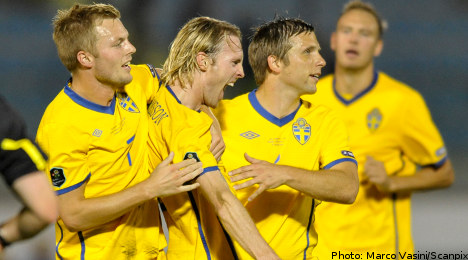 “Sporting-wise it is a very good game for us. Our desire is to always meet as good opposition as possible at the internationals that are outside the qualifying and championship games,” Erik Hamrén said.

The English Football Association confirmed the friendly against fellow Euro 2012 qualifiers Sweden would take place at Wembley on November 15th.

The Swedes booked their ticket to Poland and Ukraine after defeating World Cup finalists the Netherlands 3-2 on Tuesday to finish as the best group stage runners-up.

The match will be the 22nd meeting between the countries, and the first since a 2-2 draw in Cologne during the first round of the 2006 World Cup, when Henrik Larsson scored late in the game to save a point.

The visit will be the 22nd meeting between the teams, with the record showing six victories each and nine draws.

It will be Sweden’s first visit to the new Wembley Stadium and first trip to London in over a decade.

Sweden have not lost to England at Wembley since 1968, with the goals on that occasion scored by Sir Bobby Charlton, Martin Peters and Roger Hunt.

Sweden plans a further international friendly in November, with the opposition yet to be announced.