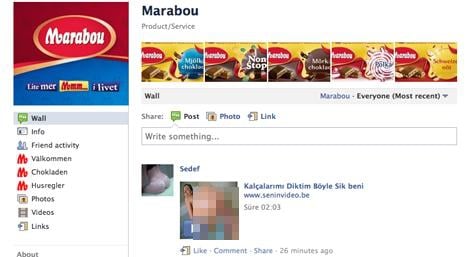 It has now been opened again, but members are no longer allowed to post entries of their own.

“We want everyone to feel welcome and no one to feel offended,” said Hilda Björkman, marketing manager of Marabou’s chocolates at Kraft Foods, to Dagens Media.

It’s still possible for members to comment on official entries, made by Marabou, a possibility seized with great enthusiasm by many chocolate lovers.

Marabou hasn’t experienced such a serious spam attack on their Facebook page before, and is hoping to lift restrictions on their page soon.

“Our chocolate friends can still comment on our posts, even if we’ve temporarily chosen to shut down the function for posting entries, as a security measure over the weekend. Next week we’re counting on opening up everything as usual,” said Hilda Björkman to Dagens Media.