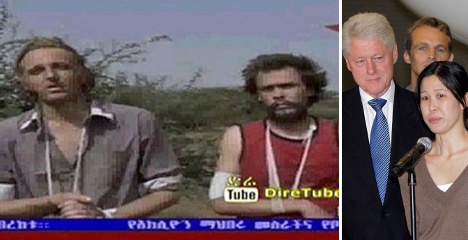 As Martin Schibbye and Jonas Persson enter their fourth month of captivity in Ethiopia, the hope that their cases would be resolved quickly is dimming fast.

They are charged with “aiding terrorism” and it looks like the Ethiopian courts intend to proceed with a criminal trial.

If so, the two are undoubtedly facing a lengthy ordeal.

Still, their situation looks far more hopeful than that of their colleague Dawit Isaak who has spent ten years in jail in neighbouring Eritrea without charge or trial.

At least we know where Schibbye and Persson are held and that they are healthy. They have also had access to Swedish diplomatic representatives, a fundamental provision of international law and one yet to be granted to Dawit Isaak.

And it is an encouraging sign that Norwegian Prime Minister Jens Stoltenberg apparently discussed Schibbye and Persson’s imprisonment in some depth with Ethiopia’s Prime Minister Zenawi who was visiting Oslo just a few days ago.

If the Isaak case provides any applicable lessons, it is the hope that the Swedish government this time will act decisively on behalf of their two captured citizens. And with Ethiopia, Swedish officials should have a good chance to do precisely that.

While Eritrea has been branded a pariah state for its support of Islamic terrorist networks in the Horn of Africa, Ethiopia has been embraced by Western governments, especially by the US, as a bulwark against such groups.

And, as the Washington Post reported just last month, Ethiopia is about to become even more important in the US strategic planning to oppose the violent intentions of Islamist movements in the area.

On September 21, Washington Post reporters Craig Whitlock and Greg Miller exposed the fact that the US has been preparing for four years to install predator drone bases in Ethiopia.

These are to supplement similar bases in other African countries, such as Djibouti and the Seychelles, and on the Arab Peninsula.

According to the report, Ethiopia is to play a key role in the United States’ preemptive counter-terrorism strategy where “the aim is to provide overlapping circles of surveillance” of areas and groups sympathetic to al Qaeda.

As Whitlock and Miller point out, Ethiopia already provides critical support, especially linguistic skills, to the fight against the al Shabbab network in Somalia.

Many international political and legal observers have raised serious concerns about the expanding drone strike capabilities of the US military, including the weapons’ use to carry out targeted assassinations of known and potential terrorists.

Especially worrisome are civilian casualties resulting from such attacks. Swedish law Professor Ove Bring, former Swedish foreign minister Hans Blix, US legal expert Stephen L. Carter, and others have all called for a thorough debate about the many ethical questions raised by drone warfare.

European and US lawmakers should join this discussion and stress in particular that they will not condone the growing abuse of domestic anti-terrorism laws in the Horn of Africa, either as a tool to silence critics or to prevent public scrutiny of abusive practices.

While Schibbye and Persson were ostensibly arrested for covering the separatist Ogaden National Liberation Front (which the Ethiopian government deems a terrorist organisation), it appears that their detention was more likely linked to their investigation of the catastrophic effects of Lundin Petroleum’s oil and gas exploration on the civilian population in Ogaden province, as was first documented by Kerstin Lundell in her book, Affärer i blod och olja. Lundin petroleum i Afrika (Ordfront, 2010)

Swedish officials should be able to use the debate about these core questions to their advantage and to lean on their American counterparts to offer practical assistance to gain the release of Persson and Schibbye, before Sweden can formally support US military plans in Ethiopia and elsewhere in the region.

Just as Sweden played a pivotal role in the release of two American journalists captured in North Korea in 2009, the US can hopefully find a way to return this favor in Ethiopia.

Thanks to the Swedish Ambassador in Pyonyang, Mats Foyer, US diplomats were able to communicate with the two young women, Euna Lee and Laura Ling, who had been arrested for trying to interview North Korean defectors.

A deal was struck and with the intervention of former US president Bill Clinton, the two journalists were released five months later, when the North Korean government issued them a pardon.

Such bold and positive action may also draw wider circles: solving Schibbye and Persson’s cases may provide the necessary impetus for European countries to reevaluate their problematic support of Ethiopia in its still sweltering border conflict with Eritrea.

In 2002, Ethiopia simply ignored a finding of the International Boundary Commission that had ruled in favor of Eritrea, regarding the disputed Badme territory. The international community, viewing Ethiopia as a “vital strategic partner”, more or less chose to overlook the affront.

As Africa expert Michela Wrong argued in a sharply worded commentary for the Financial Times this past August, the decision proved to be a major factor on Eritrea’s path to becoming the pariah state in the region and its intractable position in human rights cases like that of Dawit Isaak.

Sweden may now have a real chance to correct two major ills in one go. Hopefully Swedish decision-makers will not hesitate to think outside the box and work with their international partners to secure the release of all three of its citizens.