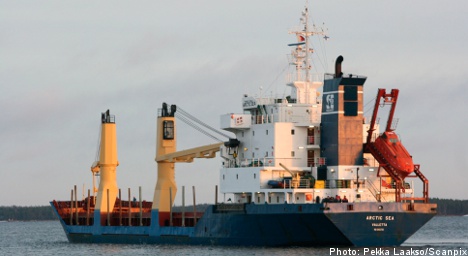 In their new book, Myrskyn Silmässä (Eye of the storm), Timo Hellenberg and Pekka Visuri explain their theory that biological, chemical, nuclear, or radioactive materials extracted in Russian Kaliningrad, were loaded onto the ship when it was hijacked in Swedish waters.

They two however dismiss suspicions that nuclear warheads and missiles were being transported on board the ship.

According to official documents, the ship was carrying timber worth over €1.3 million ($1.8 million) and the hijackers later demanded a ransom of $1.5 million, the Financial Times Deutschland newspaper reported at the time.

But the Finnish researchers claim the ship was heading to the Middle East with the valuable weapon materials, which was allegedly stolen from the Russian government.

They argue that the hijacking was downplayed by Russian officials, and question why the Finnish government was not informed immediately.

The vessel “Arctic Sea” took off from Finland on July 23rd, 2009 and was reportedly hijacked the following night outside the coast of Swedish island Öland in the Baltic Sea.

The ship was later sighted in the English Channel, but connection was lost until the Russian navy was able to reclaim to vessel off Cape Verde on August 17th the same year.

At the time, authorities arrested eight Russian and Baltic men, six of which were sentenced to up to 12 years in prison in Russia in March 2011.

The Finnish researchers’ book is set to be published later this week.