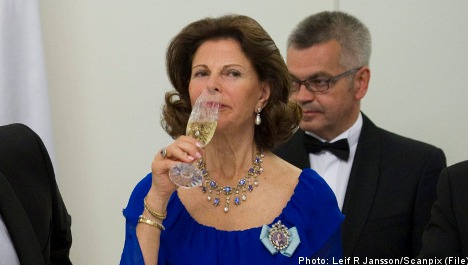 The Queen said in an interview in daily Svenska Dagbladet (SvD) that she is worried about Swedish teenagers’ drug habits and has done her best to teach her own kids a healthy attitude toward drinking.

”Of course you get called old fashioned. I think all parents recognise that situation,” said Queen Silvia to SvD.

The Queen spoke out about raising children in today’s harsh world, saying that there are many pitfalls and that she found it important to get to know the parents of her children’s friends.

”If we knew each other we could share the same principle rules and guide the kids the same way. Otherwise it is common that the kids say ‘But he’s allowed and she’s allowed…’, she said.

The Queen went on to remember how the topic of drinking was brought up during the planning of a particular party for the teenage kids at the Drottningholm palace.

After calling the other parents for their input, the Royal parents decided to serve one glass of wine, followed by soft drinks.

”Some thought ‘Well, they’re confirmed so of course they’re allowed some wine’. Others said ‘No, we really don’t think that’s a good idea’ and others said ‘Perhaps one glass’, said the Queen to SvD.

”So that’s what we did,” said the Queen.

However, the Queen’s admission has sparked criticism from Sweden’s temperance movement IOGT-NTO.

”It might seem harmless to let teenagers have a glass of wine. And it probably is, during that precise moment. The risky part is the gesture that says it is OK for teenagers to drink alcohol,” wrote Anna Carlstedt, chairwoman for the organisation, in an opinion piece in SvD.