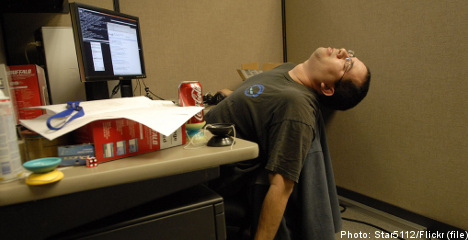 “Our analysis shows a significant connection between working (night) shifts during a young age and the frequency of MS,” Karolinska researcher Anna Hedström said in a statement.

For the study, published in the Annals of Neurology, the researchers combed through data from two Swedish population-based studies: one with all newly diagnosed MS cases since 2004, or 1,343 people and 2,900 control individuals without the disease, and another group of 5,129 people registered with pre-existing MS diagnoses and a 4,509-strong control group.

All of the study subjects were between 16 and 70 and were asked questions about their work life and whether they had ever worked odd hours.

The team compared the occurrence of MS among study subjects exposed to shift work — defined as working any time between the hours of 9pm and 7am — at various ages against those who had never worked night shifts.

The result was astounding: in both groups the researchers found that those who had worked night shifts for longer periods of time before they turned 20 had twice the risk of developing MS compared to those who never worked shifts.

The researchers suggest that disrupting a person’s circadian rhythm, or daily rhythmic activity cycle, along with sleep loss could play a role in the development of MS.

“With shift work, your biological clock gets out of whack and you have poorer sleep quality (and) both these things have been shown to impact the immune system,” Hedström told AFP.

She said her team, which had taken into account all other known risk factors, had been working on the hypothesis that night shift work could increase the risk of MS, but they were surprised to see that only night shift work before the age of 20 seems to have any impact on developing the disease.

“I don’t think anyone had expected there to be this critical period when you have to be exposed to it,” she said, acknowledging that “that is difficult to explain for now”.

She pointed out that other studies have similarly shown that only obesity at a young age increases the risk of MS, while becoming obese as an adult has no impact at all.

Previous studies have shown that working night shifts or with rotating hours increases the risk of cardiovascular disease, thyroid disorders and cancer, also due to how disrupted daily rhythm and sleep impacts the immune system.

In MS, the immune system attacks myelin, the protective fatty sheath that swathes the nerve fibres.

As a result, nerve signals get lost, delayed or disrupted, causing problems in coordination, balance, speech and vision, and the problems worsen as the disease progresses. The disease affects around one person in every thousand.

It is presumed to have a mix of environmental as well as inherited causes.