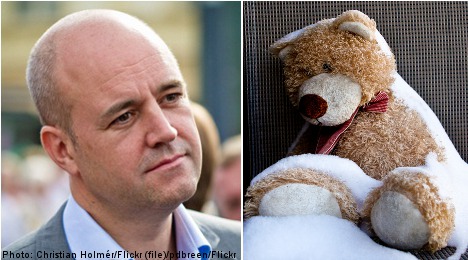 Seven-year-old Kika Hendrickx moved with her mother and father to Stockholm from Belgium a year ago. When her grandparents came to visit the family went for a tour in the new hometown, the Expressen newspaper reported.

Hendrickx packed her backpack, still marked with the Belgium address, with her teddy bear Kokosh, and off they went. Unfortunately Kokosh didn’t make it back home from the family’s adventure in the Swedish capital.

“Somewhere along the tour she lost her backpack,” Hendrickx mother Annick Hernot told the newspaper.

“We had no idea where to look for it so I though that was end of story.”

When Hernot returned to Belgium two weeks ago to check on he family’s house, she discovered a package waiting for her from an unexpected sender: the Swedish government

Inside the package Hernot was surprised to find her daughter’s backpack, teddy bear included, along with two photographs.

One picture showed of three uniformed men calling themselves “The rescue team,” holding up Kokosh to the camera.

The other one was of Sweden’s Prime Minister, Fredrik Reinfeldt, accompanied by a note saying, “I hope the teddy bear finds its way home.”

Apparently, guards had found Hendrickx’s backpack outside the Swedish government offices at Rosenbad, when opportunity presented itself, they consulted the Prime Minister what to do.

“It’s not very often bags are found outside Rosenbad, so there’s no standard procedure for how this should be handled,” Reinfeldts press secretary Sebastian Carlsson told The Local.

“But Reinfeldt thought it would be fun to send it back to the girl since her address was on the bag.”

And he not only wanted to sent it back, but also add a personal note.

But time passed and they didn’t hear back from the stuffed traveller.

Hernot said one of the guards had told her the Prime Minister had asked about the status of the teddy bear, but that was before it was found.

Once teddy bear Kokosh finally made its way home, her joyful master thanked the rescue team with Belgian chocolate, and sent a personal thank-you letter to Reinfeldt.

“He has received the letter but I haven’t spoken to him after that,” Carlsson said.

“But I assume he was happy to get it.”