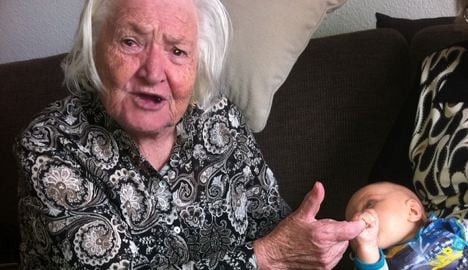 Otto received a call from the Migration Board when she was accompanying her grandmother to Arlanda. They had reached the northern outskirts of the capital when the phone rang.

Otto hadn’t told her grandmother that she was going to be put on a plane back to Ukraine, but that a film was being recorded about her at the airport, according to the Aftonbladet daily.

As soon as Otto received the good news however, she spilled the beans to her grandmother.

“Then Ganna said ‘Is it true? Can I really stay?’,” Otto told the paper, adding how her grandmother sat smiling quietly the whole taxi ride back to their home.

The authorities at Arlanda airport, outside Stockholm, had been informed of the cancelled deportation at the very last minute.

Otto had spent the day out at the airport trying to convince the airline to refuse her grandmother to board the plane, due to her medical condition.

However, her efforts had been to no avail, and she had returned to the city to collect her grandmother to escort her to the airport when the Migration Board rang.

However, according to Andreas Lundberg at the Migration Board, this is just a temporary reprieve even if it may become permanent.

”The case is under review by the European Court of Human Rights,” said Lundberg to TT.

Otto is aware that it is only a temporary reprieve.

“No, this is not for ever. It has simply been called off for now,” she said to TT.

The relief that the deportation was called off on Tuesday afternoon was obvious however and to Aftonbladet Otto said:

“We have battled and won. I am overjoyed and relieved. It is fantastic!”

Protests against the deportation have been strong, with both individuals and organisations speaking up on Chyzhevska’s behalf and several political parties are now demanding that the legislation is changed.

Otto is now hoping that the wave of criticism against the deportation of her grandmother may make it possible for her to stay permanently in Sweden.

“I don’t know if this will happen, but now we have won some time,” said Otto to Aftonbladet.