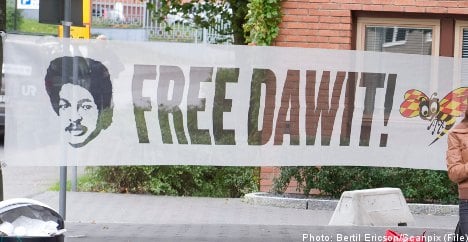 “We want everyone to know that we are not a part of the campaign and never will be. They pretend we are a great big happy family, but that is far from the truth,” said Isaak’s 18-year-old daughter Bethlehem to daily Svenska Dagbladet (SvD).

According to Isaak’s wife Sofia and children Bethlehem and Yorun, the Free Dawit Isaak campaign is the reason Isaak is still behind bars.

Because his case has been politicized, his release is now impossible, the family told the paper.

“We can’t sit in Sweden and dictate how Eritrea should be governed. It has just made my father’s situation worse,” said Bethlehem to SvD.

The family revealed how the battle about campaign strategies has torn the family apart since 2005.

Six years ago, the family was first told Dawit Isaak had been released, but it later turned out he had only been let out to see a doctor.

After that, his immediate family wanted to change strategy, but Isaak’s brother Essayas and his foster father Leif Öbrink, the leaders of the campaign, refused.

Since then, Dawit Isaak’s wife and children have had no part in the campaign and Isaak’s wife Sofia said she hadn’t spoken to her brother-in-law for the past six years.

Together with her children, she is critical of the campaign. According to them, the Dawit Isaak campaign has been hijacked into a great political issue.

“But in reality it is about us, a family who has been robbed of our father for ten years. They are not doing this for his sake but for their own,” Bethlehem Isaak told SvD.