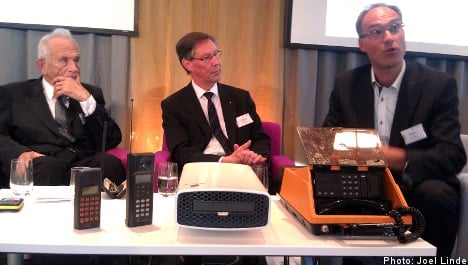 During a few days in June 1969, top executives from the Nordic countries’ telecom administrations gathered in Lofoten in the Norweigan archipelago for their 34th conference.

One of the Swedish representatives, Carl-Gösta Åsdal, Chief Radio Engineer at Televerket (now TeliaSonera), came with a bold suggestion. He wanted to look into the possibilities of joint mobile telephone solutions between the Nordic neighbours.

The committee decided to form a subgroup with the mission to “explore the opportunities for standardizing the signal system for selective calls using existing public mobile telephone services.”

“It is very important to us that we observe this, which has had such great influence on the communication that we today take for granted,” Håkan Dahlström, Head of Business Area Mobility Services at TeliaSonera, said during a recent event celebrating the 30th anniversary of NMT, considered to be the first modern mobile telephony communications standard.

By his side were also some of the pioneers in the development of the groundbreaking system.

It all grew out of the idea to enable easier communication between the Nordic neighbours: mobile devices that could connect people in the large, but sparsely populated north.

But it took time to get there, and effort to convince decision makers.

“At first, the one making the call would have to know where the telephone receiving the call was located,” said NMT’s Thomas Haug, who helped push through the technology several decades ago.

“You also had to memorize 14 digits,” he added, “so that was rejected.”

But researchers kept working to develop a marketable product, even though many had a hard time seeing the need for such technology, partly because there was nothing to compare it to.

However, when the “010” prefix was introduced the system was able to keep track of the mobile devices, and people could call across borders without having to indicate the location of their receiver.

Suddenly, NMT was close to a breakthrough.

“We started sending out quotes to industries, and the first base stations were actually Japanese, made by Mitsubishi,” Haug said.

Swedish counterpart L.M. Ericsson was at this point still hesitant to support the revolutionary technology, but after some negotiating, they decided to invest in the idea and expand the network with their own equipment.

The big launch was set to October 1st, 1981, at Televerket’s switch in the Stockholm suburb of Hammarby.

NMT would be first in the world to offer this mobile service with a projected expansion to half a million users within 10 years.

For starters, Sweden didn’t end up being first. Saudi Arabia did, thanks to an unexpected contract L.M. Ericsson sealed with the Saudis in cooperation with Philips.

While the NMT technology was used in Saudi Arabia, it took another month until modern mobile phone service was launched in Sweden.

But then the switch was turned, and Sweden became mobile.

Nevertheless, scientists and leading technicians at NMT, including Televerket Marketing Director Bo Magnusson, were quickly asked to recalculate their estimates of how big the mobile phone market would be.

It was simply impossible that this new technology would attract 500,000 users, many thought.

Estimates were revised downward to 45,000 subscribers.

But within a year, NMT had 35,000 subscribers, and counting.

From then on, there was no stopping the phenomena that has become modern mobile telephony.

The system quickly became overloaded, but new innovations came to the rescue.

Time after time, forecasts were revised upwards as new users gushed in to take part in the revolutionary invention, proving the initial forecast right by the end of the decade.

“Stores specializing in gadgets and accessories started selling phone mounts for cars,” Magnusson said, “and people would install those to make others think you had a mobile phone.”

But the market demand changed, and as NMT expanded, new technologies were born to support the growing population’s growing needs.

NMT eventually started its decline, however, parallel to the development of a new standard, GSM, which would soon claim the leading position in the mobile world.

By 1997, the two systems each had one million users around the world–more than double the estimate originally thought to be wildly optimistic.

“Sweden and Ericsson have NMT to thank for an incredible number of things,” Johan Wibergh, Head of Business Unit Networks Ericsson, told the NMT pioneers.

“You have contributed to the fact that five billion people today have telephone service.”

Wibergh admitted that it was because of the pressure and initiative by NMT, that Ericsson was forced to develop its own mobile technology, which wasn’t an obvious choice in the beginning.

But it didn’t take long until the demand was obvious, and a new and lucrative market had emerged.

“We are only in the beginning of a very long journey,” Wibergh said, adding that they are working to enable mobile broadband for five billion people by 2015.

“Eventually, everything that benefits from being online, will be.”