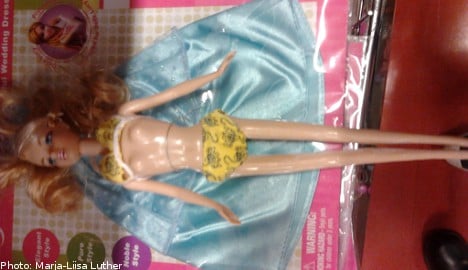 When Marja-Liisa Luther from Umeå, in northern Sweden, took her daughters to Swedish toy chain Barnens Hus last week she was shocked to find a doll skinny enough to make Barbie look overweight on the shelf aimed at girls aged 4-6.

”I couldn’t believe my eyes when I picked it up,” Luther told The Local.

Luther grabbed hold of some of the other parents nearby asking them for their opinion and then picked up her phone and snapped a picture of the emaciated doll.

When she got home Luther uploaded the image to Facebook but had no idea how strong the reactions would be.

”It became so much bigger than I had imagined. The picture was shared on Facebook an enormous amount of times and then the papers started calling me and the topic was brought up on TV,” Luther said.

Many parents have been upset about the way the doll looks and how it will potentially influence children.

”I am really pleased people have reacted. It shows that they care about these things,” Luther said.

Luther, who is studying to become a pre-school teacher, is convinced that children are influenced by the toys they play with.

”Kids who play with the doll will identify with it. They might feel that it is natural to be super-skinny and think ‘Well, maybe this is the way I should look too’,” Luther said.

The doll in question is called Defa Lucy Mermaid Princess and was being retailed in six of the Barnens Hus stores in Sweden.

However, after the media storm the doll was removed from the shelves on Tuesday morning.

”We are going to have a closer look at the doll. I don’t think it will go back on the shelf again,” said Thomas Westerdahl of Barnens Hus to newspaper Metro on Wednesday.

He told the paper that two other dolls were removed from the shops as late as April for similar reasons. He also confirmed that the picture had not been airbrushed.

”It is a miss in our internal screening system. This one shouldn’t have made it to the shelves,” he said to Metro.

Luckily, according to Westerdahl, not many of the dolls have been sold.

Marja-Liisa Luther is pleased that the shop has removed the doll from store shelves.

”It looked simply awful. The other dolls are surely skinny enough as it is and this was extreme,” said Luther to The Local.