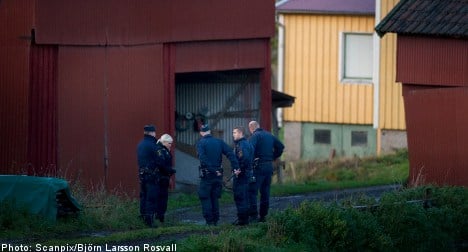 Police describe the victims as a pair of well-meaning farmers who operated a farm in the small village of Långared, about 15 kilometres north of Alingsås.

“It’s a very ugly murder. This is a blameless, industrious pair of farmers who, for some reason, have been subjected to extremely aggravated violence,” Haraldsson told the TT news agency.

What is all the more strange for investigators is that the killings appeared to have taken place when the couple were on their way to choir practice.

Out in the garage nine neighbours and friends were waiting to take them to the nearby evangelical church in which they were active.

The group had driven out to the farm after the couple failed to appear at the scheduled afternoon choir practice.

“It was the neighbours and friends who were coming to get them and take them to singing practice,” said Haraldsson.

The group of people were interviewed about the incident, but none of them are currently suspects in the killings.

The couple were apparently attacked by one or more people who wanted to do them harm.

“We received a call from [emergency services operator] SOS saying that a person had called them and said that something serious had happened. We went out there and found a dead man in a barn,” Västra Götaland County police spokesperson Ulla Brehm told the TT news agency.

“Then when we searched the residence we found a dead woman,” said Brehm.

Kjell Norberg, pastor at the nearby Mission Church, spoke with some of the people who were aware of what happened.

“I know where the farm is, who they are, and a whole lot more as well. But there’s nothing more I want to say,” he told TT.

“At this point there aren’t that many who know about what happened, but people are going to be shocked, sad, and mystified.”

Police continue to examine the crime scene and Haraldsson urged members of the public to come forward with any information that might be relevant to the police investigation.