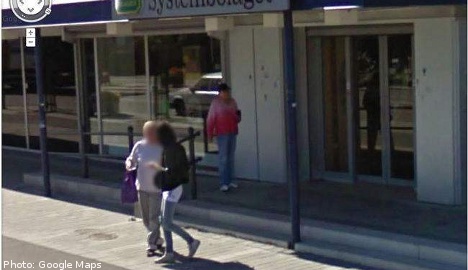 ”It seems like a case of peddling alcohol and a very cheeky one at that,” said head of the local police, Peter Wikberg, to regional paper Dagbladet when he first saw the images.

In the images, which can be viewed using Google Maps’ Street View function, a woman exits the local branch of the state-run liquor store monopoly with a what appears to a signature Systembolaget-brand plastic bag in her hand.

Suddenly a young girl joins her and just outside of the entrance, in the middle of the street, the woman hands the bag over to the girl.

Unbeknownst to both, a Google Maps photographer, happening to pass by that location at precisely the same moment, captured the entire transaction on camera, thus making it available for the entire world to see on the internet.

According to daily Dagens Nyheter (DN) the police has managed to pinpoint more or less when the incident occurred, by looking at the Google images of the other parts of the town.

Roadworks, finished during autumn 2010, were in full swing as the pictures were taken. A car belonging to one of the local police officers is also parked outside the station, which indicates that it wasn’t a weekend.

But that’s about as much as police have been able to glean from the pictures.

On Thursday, the head of the local Systembolaget outlet visited the station but was also unable to identify the people in the picture.

As it has been impossible to ascertain the identity of the people, the contents of the bag, or the time of the incident, there is not much the police can do despite their suspicions that the images do indeed record the illegal purchasing of alcohol for a minor.

”From what we know today there are no legal avenues open to take this further,” said Wikberg to DN.

Wikberg was nevertheless impressed that Google Maps had managed to catch a potential case of alcohol peddling considering the many hours local police has spent on both surveillance and anti-peddling campaigns without catching anyone in the act.

”It must be a chance in a billion that you go past one day and manage to catch an ongoing crime on camera. Incredibly fascinating. We may have to review our surveillance methods after this,” he said to Dagbladet.

However, Wikberg later pointed out to DN that the pictures don’t actually prove that what is seen is a case of alcohol peddling. It could be a case of a mother and her daughter, where the girl only holds the bag for a moment.

”The most positive scenario would be if there was a natural explanation and these people got in touch with us so that we could find out what really happened,” he told the paper.

The images have spread via Facebook and one of those that reacted strongly against them is the chairman of the local social welfare board (Socialnämnden), Per-Arne Frisk.

“I have been out on town myself and worked really intensely against the peddling of alcohol to minors. When I see pictures like this I quite naturally get very upset,” he said to Dagbladet.

Frisk is worried that it may give a false and negative image of the Timrå community to the rest of the world, despite the possibility that it is a completely innocent incident.

SYSTEMBOLAGET
When can you buy alcohol in Sweden on New Year’s Eve?
Url copied to clipboard!