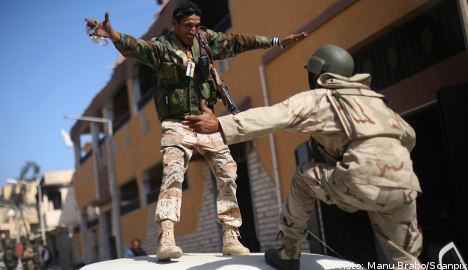 “Forty years of dictatorship are over. Now we can build a new Libya,” said Swedish prime minister Fredrik Reinfeldt on Thursday to daily Dagens Nyheter (DN).

The news of the ousted leader’s capture broke during the day, and was quickly followed by reports that he had been killed in the scuffle.

The Libyan opposition later confirmed that their soldiers had seen Qaddafi’s dead body.

Although Fredrik Reinfeldt had been hoping for a trial, where Qaddafi had been held accountable for his crimes, he told DN the most important thing was that he had been found.

Foreign minister Carl Bildt was quick to comment on the capture of the former leader of Libya, tweeting about the capture shortly after the news broke.

However, he too had been hoping for a trial for the ousted leader.

“I would prefer it if he was alive so that he could be tried in court and held accountable for his crimes,“ Bildt told daily Expressen.

The Social Democrat spokesperson on foreign affairs, Urban Ahlin, agreed that a trial could have made public the offences committed by the former Libyan leader.

“It is important that the offences of a dictator are made known, that people get to know, it is vital for the rebuilding of the country,” said Ahlin to DN.

According to Ahlin, difficult times lie ahead for the Libyan people.

“We know how hard it can be to organise a democatization process. But it is a good starting point,” he said.

Shabal Elgale, spokesperson for the Libyan opposition in Sweden was overjoyed with the news that the regime had fallen.

“This is a great victory for the Libyan people, for the Libyan nation. After 42 years, the country is finally liberated,” he said to newspaper Expressen on hearing the news.

Elgale told the paper that he had already spoken to people at home in Libya and that the party has already started there.

“It is a great feeling. They are very happy and are out celebrating victory. This is a big day, “ he said.

Prime minister Reinfeldt was pleased to be able to say that Sweden had participated in the liberation of the Libyan people.

“I am very proud to see that the Swedish efforts have played their part, we have participated in making a difference,” Reinfeldt said,