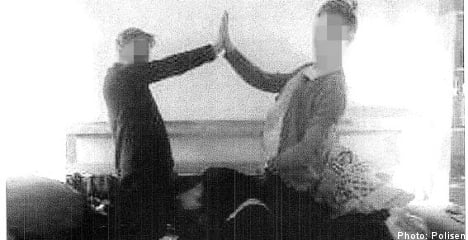 “She considers herself to have been seriously violated,” prosecutor Gunnar Merkel told the Metro newspaper.

The case stems from an incident which took place in early 2010 when the two 20-year-old men decided to secretly take pictures of the 18-year-old during a party.

The girl had consumed copious amounts of alcohol during the evening and ended up passing out on a bed.

The two men then decided it would be fun to take some compromising pictures of the woman. In one instance the men can be seen giving each other a “high-five” with their sex organs exposed next to the woman’s sleeping body.

The men also pulled down the 18-year-old’s shirt and took pictures of her bare breasts while she slept.

Police came across the pictures months later on a computer belonging to one of the men in the course of a drugs investigation and were able to identify the woman using transcripts of internet chat conversations.

When police informed the woman about the existence of the humiliating pictures, she decided to pursue a criminal case against the men, who were eventually charged with sexual molestation.

Despite photographic evidence documenting their actions, the two men were nevertheless acquitted of the charges by the Stockholm District Court.

The two men couldn’t be convicted, the court ruled, because the 18-year-old wasn’t aware she was being molested at the time of the alleged crime.

According to Swedish law, molestation, sexual or otherwise, is only a crime if the victim is aware of the molestation at the time it’s actually taking place.

And currently, taking pictures of people in secret isn’t a crime under Swedish law, although a new law is on the way.

Prosecutor Merkel has nevertheless vowed to appeal the ruling.

“This is about more than simply taking pictures in secret,” he told Metro.

Both men were however convicted of the narcotics offences for which they were also charged.