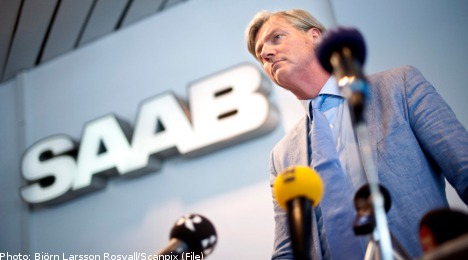 “The Chinese parties no longer wish to cooperate with Saab Automobile’s (Dutch) parent company Swedish Automobile. (They) instead want to invest directly in Saab Automobile and thereby take over all ownership in Saab,” said the carmaker’s court-appointed administrator Guy Lofalk.

Swedish Automobile (SWAN) confirmed in a statement Friday that its Chinese partners Pang Da and Youngman, which had agreed to inject €245 million ($335 million) into Saab in exchange for about half the carmaker, had now offered to buy the whole company.

“SWAN declined the offer,” it said in a statement, adding it had “requested confirmation from Pang Da and Youngman that they are able and willing to consummate the (signed) agreements… That confirmation has not been received to date.”

In a filing Friday to the Vänersborg district court in southwestern Sweden, Lofalk meanwhile said he did not think Saab would get the needed funds and he therefore no longer thought the company’s three-month reorganisation under bankruptcy protection would be successful.

“It is my duty as administrator to apply for the reorganisation to cease,” he wrote.

If the court grants his petition, thousands of individual requests from employees and suppliers for Saab to be declared bankrupt, which have been put on ice during the reorganisation, will be reactivated.

The company’s charismatic chief executive Victor Muller had convinced a Swedish appeals court last month it would be possible for Saab to land on its feet if it could just keep its creditors at bay until the cash from Pang Da and Youngman came through.

The company, which at the time said it had about 150 million euros in outstanding debt, said it expected that cash injection in November and that in the meantime it would get a 70-million-euro bridge loan from the two Chinese companies to help keep it afloat.

Lofalk pointed out that the bridge financing had not come through, significantly delaying the restructuring work.

During two trips to China, he said he had understood that SWAN and the two Chinese investors did not see eye-to-eye on where the deal was headed.

“There is no time to find other solutions due to (Saab’s) financial situation. (It) is not in the current situation in a position suitable for continued reorganisation,” he said.

Late Thursday Muller told Swedish local radio station P4 Väst he was “disappointed” with Lofalk, who he accused of secretly meeting with Youngman and Pang Da and pursuing his own agenda aimed at pushing Saab into new

SWAN said it had been given until October 27 to respond to Lofalk’s request, saying it would contest it and demand a new administrator.

The court has informed the company that it will rule on the issue on October 28, SWAN said.

The company meanwhile insisted the new developments did not alter its announcement Thursday that it had secured funding from US private equity firm North Street Capital, which is set to buy $10 million in shares and provide a loan of $60 million by the middle of next week.

SWAN however said that due to the new developments, it would delay reporting its third quarter results by nearly a month to November 30, instead of October 28 as previously planned.