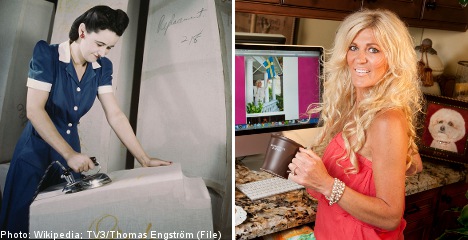 In a survey conducted by the Swedish family lifestyle website familjeliv.se, 45 percent of mothers indicated they wanted to be housewives.

The thought of staying home full-time to tend to household chores and children was most popular among younger mothers aged 18- to 29-years-old, with 53 percent responding that they wanted to be at home.

Among mothers aged 30- to 44-years-old, 40 percent of respondents indicated they would prefer to be at home.

According to Lundström, Swedish mothers have become increasingly attracted to the idea of staying at home in recent years.

“Two years ago I would have been surprised, but not today,” she told SVT.

She attributed part of the trend to the glamourization of being a housewife in the media through such television shows as “Swedish Hollywood Wives” (Svenska Hollywoodfruar).

Another contributing factor may be the dismal labour market facing many younger Swedes.

Lundström explained that the survey results also indicate that Swedish women may not be as gung-ho about gender equality as people would like to believe.

Nevertheless, the survey also revealed that only 2 percent of respondents indicated they had actually chosen to stay at home, something Lundström said likely depends on the fact that most families feel they don’t have the means to get by on a single income.

She also doubted that, if asked, Swedish fathers would be as enthusiastic about staying at home full time as they already use up relatively little of Sweden’s generous parental leave benefits.

“This shows once again that gender equality isn’t as good as one might wish,” she told SVT.

The results are based on 11,000 responses to the survey out of 70,000 who were asked to participate.