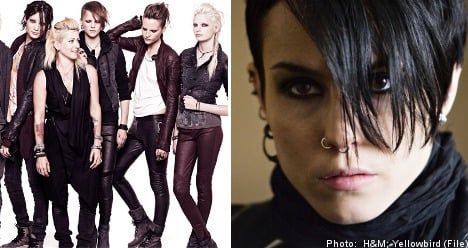 In anticipation of David Fincher’s film version of the late Swedish crime writer Larsson’s first book, “The Girl with the Dragon Tattoo,” H&M said it had asked the film’s costume designer Trish Summerville to create a line inspired by his unlikely crime-fighter Lisbeth Salander,

“The 30-piece collection has the dark urban feel that defines (Salander’s) character, with leather jackets and trousers, torn jeans and slouchy hoodies all in industrial shades of black, grey, worn white or dark red,” the Swedish cheap’n’chic fashion retailer said in a statement.

The collection would first debut “exclusively at the boutique Colette in Paris on November 28,” before being made available on December 14 at some 180 H&M stores around the world, it added.

“Salander’s look is very real and very lived in, with pieces that her character has worn for a long time, like her jackets that act as her armour to shield her from the world,” Summerville said in the H&M statement.

“I wanted the collection to have the essence and strength of Salander, with a fashion edge… My goal is for women to find pieces in it that they love and then mix them with their own wardrobe to create their own personal style,” she added.

Crusading journalist Larsson was 50 when he died of a heart attack in November 2004, shortly before his Millennium trilogy became the biggest global publishing phenomenon of the 21st century, selling tens of millions of copies in more than 40 countries and inspiring a blockbuster Swedish film series.

Fincher’s Hollywood adaptation of “Dragon Tattoo,” starring Daniel Craig and Rooney Mara, is due to be released at the end of this year.

H&M, which is the world’s third largest clothing group behind Spain’s Inditex, which owns Zara, and Gap, has since 2004 each year teamed up with top fashion designers like Karl Lagerfeld, Stella McCartney, Sonia Rykiel and this year Versace for small, hugely popular one-time collections.