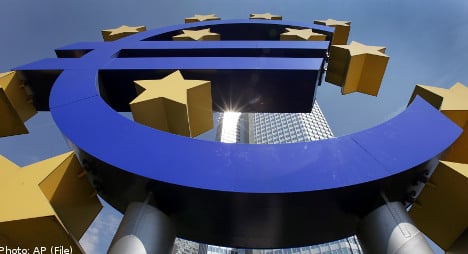 “There is a lot left to do,” Reinfeldt said.

After extended negotiations that ended only 4am on Thursday morning the group of tired leaders from the eurozone countries announced that they had a deal.

French President Nicolas Sarkozy was first out to inform that the banks had agreed to a 50 percent debt reduction for Greece.

Sarkozy acknowledged that all details are not in place yet, a sentiment shared by his Swedish counterpart.

One of the issues Reinfeldt argued, which remained to be resolved is how the eurozone countries would go about boosting the war chest of crisis fund to €1,000 billion.

“Some steps have been taken and there are grounds for cautious optimism, but one must also note that there is much left to do,” Fredrik Reinfeldt argued at a press conference in Stockholm.

He pointed out that the final document of the euro summit contained clear challenges to the countries affected by debt that they have a responsibility to clean up their economies.

The document furthermore includes projections on strengthening the emergency fund, the goal of reducing the Greek debt by 2020 and the recapitalization of banks.

Sweden’s finance minister Anders Borg expressed “cautious optimism” over the deal while pointing out the demands on Swedish banks to improve capitalization.

“For the Swedish banks this means that they have such strong profitability, so that if they retain profits for several quarters they are at that level,” Borg said.

Borg also commented on the planned strengthening of the rescue fund EFSF.

“This is a very powerful upgrade of EFSF. It is clear that there it is sufficient to go far,” he said.

The settlement was earlier described as a “positive step forward” by Swedish economists.

Robert Bergqvist, chief economist at Swedish bank SEB is among those hailing the announcement early of the deal early Thursday morning after a tough night of negotiations.

“It’s a step forward, but the content is not really surprising,” he told the TT news agency, and is backed by other analysts.

At the end of overnight negotiations it emerged that the banks agreed to write down Greece’s debt by half, and the emergency European Financial Stability Facility (EFSF) is to be strengthened up from the current €440 billion to 1000 billion.

At the same time Bergqvist warned of the effects of how quickly the new, stricter capital adequacy requirements for banks should be implemented.

“The schedule is a little too tough and could pose a threat to growth, which should be avoided,” he said, although stressed that he understood the objectives.

Bergqvist underlined that it is now up to EU ocuntries to restore confidence in the market by establishing credibility in the decisions taken.

“If the politicians change the rules along the way investors will think again over whether they should lend to heavily indebted countries,” he said.

The SEB economist concluded that there remained a number of problems for the EU countries to tackle.

“I am afraid that this we stand not at the end but at the beginning of a long and difficult process.”

That euro area countries would agree on rescue package was expected and is positive, according to Swedbank’s chief economist Cecilia Hermansson.

“But then there are many details that remain. A sufficient number of banks have to want to participate in this initiative and there are some details to work out,” she said.

“This also applies to the support fund, including how to use the insurance component in order to increase their leverage in the fund and how to get funding from, for example, China and elsewhere.”

The market’s immediate reaction, as reflected in the Asian stock exchanges leading indices, was also no big leap of joy, but the indices did climb upwards.

PARTNER CONTENT
How to pay less when sending money abroad from Sweden
Url copied to clipboard!