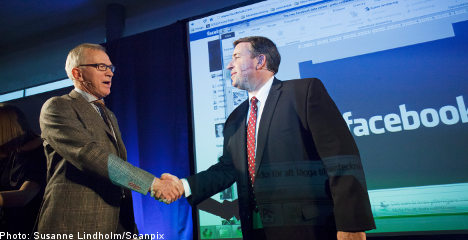 “After a rigorous review process of sites across Europe, we concluded that Luleå offered the best package of resources, including a suitable climate for environmental cooling (and) clean power resources,” said the world’s largest social media site, which counts more than 800 million users worldwide.

The icy region was especially attractive due to its cool climate, “since cooling servers is a major issue for data centres,” Facebook said, adding that Luleå also fulfilled its requirement that the data centre primarily run on renewable hydropower.

“Thanks to our main river Lule river, we can guarantee this,” Luleå mayor Karl Petersen said in the statement, pointing out that the river supplied Sweden with nine percent of its electricity.

The Luleå data centre will consist of three server buildings, each covering an area of around 28,000 square metres, Facebook said, adding that construction would begin immediately.

The first building would be open for business within a year, it said, while the entire data centre was expected to be up and running by 2014.

“About 300 full-time positions will be required during the first three years,” Facebook said, without revealing how much the construction was expected to cost.

“The investment in a data centre will give the area expertise in a future growth industry and, not least with the proximity to the Luleå Technical University, will create possibilities for more companies and activities in the region going forward,” she said in a statement.

The public investment drew criticism from the Green Party, however, which took issue with taxpayer money going to support one company when important infrastructure improvements remain under funded.

“The most important investments aren’t support for a specific company, but are rather about basic infrastructure to enable us to communicate. Broadband across the entire country, railways to be able to transport manufactured goods, renovating residential areas so that Sweden’s large industrial sectors have the chance to grow and compete internationally,” Green Party spokesperson Gustav Fridolin told the Dagens Nyheter (DN) daily.

However, Mayor Petersen was bullish on how the Facebook facility would help turn the Luleå region into a major node for European data traffic, dubbing the region “The Node Pole”.

“We hope other global companies see the innate climate qualities and benefits of the Node Pole region, and choose to follow in Facebook’s path,” he said.