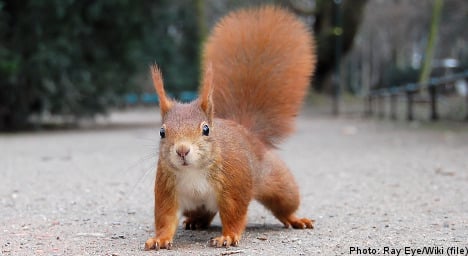 According to the application submitted to the County Administrative Board (Länsstyrelsen), the squirrel is a particularly feisty animal, having entered the house on a number of occasions, leaving behind it a trail of destruction.

After having reviewed the case for two full months, the County Administrative Board has taken its decision and the beast might soon have cracked its last nut, if the police decide to allow the Enskede resident permission to go in for the kill.

The costs for disposing of the squirrel will however be borne by the man, should he succeed with his operation.

Jonas Wahlström, head of the Skansen aquarium in Stockholm, is among those who argue that this drawn out process to ponder the fate of an animal weighing in at 300 grammes, is a little exaggerated, and cruel.

“Just put up a small budgie cage in a tree, put in some squirrel food and open the cage up,” Wahlström told Expressen.

“The grateful squirrel will then naturally climb inside and start to munch on the food. Through a long thread attached to the opening of the cage you can then close the gate. Then you just take it away.”