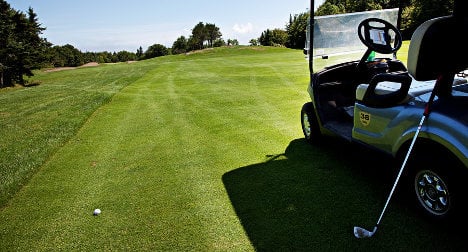 According to the website, the woman was reported to police by other golfers on the course who felt she was acting inappropriately.

She was stopped with a blood alcohol level of 1.18 per mille, well over the Sweden’s legal limit of 0.2 per mille.

The woman reportedly stated in court that she’d been at a party the night before, and had enjoyed four shots of whisky while cruising the course.

Even though the woman was drunk enough to be charged with aggravated drunken driving offences, the court found the golf cart’s low speed and the enclosure of the course to be mitigating circumstances.

Normally, an aggravated drunken driving offence results in a license suspension and a possible prison sentence.

However, Lars-Åke Magnusson of the Malmö police told Golf.se the law doesn’t differentiate between golf carts and regular cars.

“I’m not sure everybody is aware that the rules for driving a golf cart are as strict as those for regular cars,” he told the website.

“It’s a common misconception,” he added.

“Basically you can get caught if you’re drunk and are driving a golf cart in your own living room.”