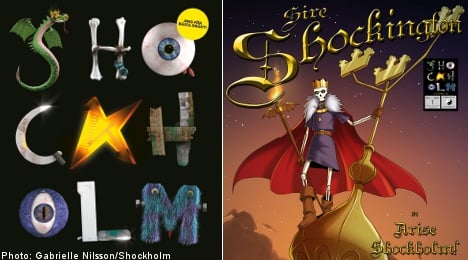 The parade has been dubbed “Shockholm” and is the result of a collaboration between creator Bill Schacht and the Fryshuset youth centre in Stockholm.

Schacht explained that his daughter’s enthusiasm and the impracticalities of heading home to New York for Halloween, gave him the drive to create the event closer to his adopted home.

“Halloween was a magical holiday for me growing up,” he told The Local.

“Every Halloween my daughter Magnolia asks me ‘what are we doing for Halloween’? and I often think ‘flying back to New York for a week’, but that’s a bit impractical.”

The parade itself will take place on Saturday November 5th, five days after official Halloween and is set to include dance, music and magic, much of which is produced by kids at Fryshuset primary school.

“We needed to do something fun since we’re a new school, so that people know that we exist,” Madelein Sahlin, the school’s principal, told The Local.

Bill Schacht is employed part-time as a teacher at the school, and having seen the massive parades on the streets of the Big Apple numerous times, he felt Stockholm deserved its own event.

“Clearly, New York is a creative town, but, so is Stockholm!” he said.

As a visual manifestation of this “creativity”, several of the city’s major landmarks have been transformed into Halloween specials.

The Globen arena, for example, has been turned into a giant “Big Brother” eyeball, the Fortum Tower into “Crazy Horse” and Söder Torn has been clad as Planters’ “Mr. Peanut”.

Shockholm’s own mascot, Sire Shockington, meanwhile towers some six metres high on the roof of Fryshuset.

While Bill Schacht has even gone as far as creating a comic book specifically for the event, featuring Sire Shockington, and his evil nemesis, Bugger Jarl, he hasn’t created the entire event himself.

“Bill stopped by unannounced because he had this idea for a project, at the same time we needed an English teacher,” Madeleine Sahlin said. “He needed kids and we needed a teacher, so it was a win-win situation.”

Sahlin explained that the school offers dance, music, skate and basketball as optional courses to its students and all these educational elements will be represented in the Shockholm festivities.

“The dance students came up with a dance for the parade and they have gotten help from the music students with accompanying music.”

More than 100 kids from Fryshuset primary school have helped organize the parade in both production and marketing, all based on a voluntary commitment, although Sahlin underlined that school work has remained a priority.

“We still have to prioritize that they achieve their goals in school, so they have really taken responsibility for this themselves and spent time after school completing it.”

The march begins at Slussen, winding through Gamla Stan to a grand ghostly finish in Kungsträdgården in central Stockholm. This is where the main party will take place, with games, food and awards for extra spectacular costumes.

Amid all the flamboyant fun and festivities, there is however a serious side to the parade.

The event has gained the support of two further partners – Children of the Night, an organization working to help children caught in prostitution, and “Min stora dag” (My big day), which works to arrange activities for critically ill children.

“At Min stora dag we’re very happy that a new and fun activity is arranged for the children in Stockholm during November, a time when it is much needed,” said Claire Rosval, founder of the organization.

Shockholm is free of charge, and all that is required is that participants dress up in spooky attire. More than 700 confirmed attendees have signed on its facebook site, and more than 800 are still undecided.

Schacht is hoping that the parade will inspire the city’s residents to let their imaginations run wild and have so much fun that the event will become an annual occasion.

“We ask you to try to be really, really creative, and positive, and happy, and then come and have a great time with people like that!”

“I’ve taught at Bergh’s [School of communications] and lectured at Hyper Island, and if we get that sort of level of creativity here, I don’t see why this won’t be the sort of thing people will want to have happen every year,” he said.

Shockholm starts at Slussen in Stockholm on Saturday, November 5th, with a pre party at 2pm, and the parade starting at 4pm. It ends in Kungsträdgården at about 8pm. Free of charge.