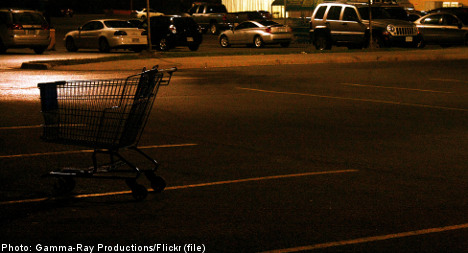 “I presume they found it quite embarrassing,” Joakim Nystedt at the Ed emergency services told The Local.

The two teenagers had wandered off for some evening fun, and ended up in a remote area of the town with few people around.

Spotting a shopping cart (trolley) they decided to have some fun and climb in.

But having stationed themselves in the cart they discovered that they were unable to get back out and were left with little choice but to call for help.

When arriving at the location, the girls had been held imprisoned by their inanimate jailer for “an hour or so,” Nystedt said. How they had ended up in the predicament, or why they hadn’t sought help from friends, he didn’t ask.

“They were sitting next to each other down in the cart, one in the front and one in the back. There wasn’t much space left.”

To get down into the cart wasn’t hard, the girls had explained, but when jammed inside the unstable cart, with no space to move, they simply couldn’t generate enough leverage to get back out.

“It was humorous,” Nystedt said saying that it was not a particularly tough job for them to extract the hapless teenagers from their predicament.

“Not a big effort. We just lifted them out and went back.”