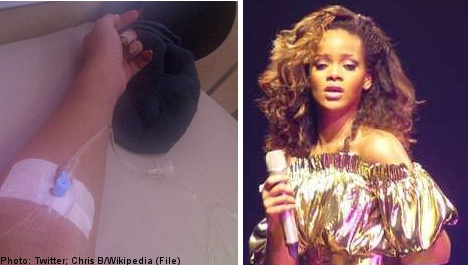 The post also included a picture of the singer’s arm attached to an IV drip.

In a statement, the 23-year-old Barbadian singer apologized again to fans, many of whom had travelled great distances to see the Malmö show.

“I am sorry to everyone who was coming out to my show in Malmö, Sweden. I was so excited to perform for you all. It would have been a great time … so much better than being sick with the flu, ugh! I’m really disappointed I couldn’t be there,” Rihanna said.

Despite the artist’s apologies, many fans were bitterly disappointed.

“I’ve been waiting ten months for this and now it’s cancelled,” 20-year-old Emelie Knopp of Gothenburg told the Aftonbladet newspaper.

“It’s bloody annoying that she reported sick 40 minutes before the concert.”

Rihanna was scheduled to perform in front of a record crowd at Malmö Arena Monday night, but was forced to cancel the show on short notice after behing taken to hospital with flu-like symptoms.

In a statement, Åkesson said arrangers are working to reschedule the show.

“We expect a decision within 48 hours,” he said on Monday night.

Speaking with the Expressen newspaper, Åkesson said Rihanna’s concerts planned for Tuesday and Wednesday night in Stockholm remain on schedule.

“We’re working to be able to carry out the concerts. That’s what we’re hoping. We haven’t received any signals otherwise,” he told the newspaper.

Rihanna, who released her debut album in 2005, has sold more than 20 million albums and been award four Grammy awards.

Her sixth studio album, “Talk That Talk”, is set to be released in November.