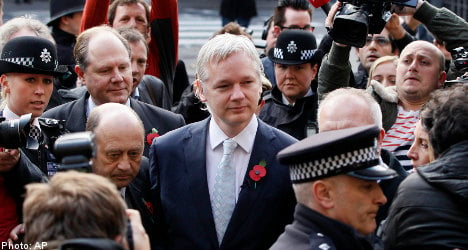 On Wednesday, the High Court in London affirmed a lower court ruling that allowed Sweden’s extradition request to move forward following his arrest in the UK in December.

“The court dismissed the appeal,” the judgement said.

Assange wore a blue suit with a poppy in his lapel — a symbol in Britain to mark Armistice Day on November 11, the anniversary of the end of World War I — and fought his way through a scrum of photographers to get inside the building.

He had argued that because the European Arrest Warrant under which he was held was issued by a prosecutor, not a court, it was invalid, but the judges ruled it had been subject to independent judicial scrutiny in Sweden.

They also rejected his assertion that the claims made by two women of unlawful coercion, two counts of sexual molestation and an accusation of rape would not as they were described be considered offences under English law.

One woman alleged that Assange had unprotected sex with her while she was asleep, and the judges rejected his lawyers’ contention that consent to sex on condition that a condom was used remained consent when a condom was not used.

“There is nothing in the statement from which it could be inferred that he reasonably expected that she would have consented to sex without a condom,” the court judgement said.

“It is clear that the allegation is that he had sexual intercourse with her when she was not in a position to consent and so he could not have had any reasonable belief that she did,” it added.

He also questioned the validity of the arrest warrant because he was not charged in Sweden, only wanted for questioning, but the judges rejected this, saying the case against him was clear.

“There can be no doubt that if what Mr Assange had done had been done in England and Wales, he would have been charged and thus criminal proceedings would have been commenced,” the judgement said.

The final ground of appeal was that the arrest warrant was disproportionate, given that Assange had offered to be questioned via videolink, but the court also dismissed this.

Assange said he would consult his lawyers about whether to make a further appeal to England’s Supreme Court, but doing so would be difficult as judges must first decide that the case is of special public interest.

“We will be considering our next steps in the days ahead,” the former computer hacker told a scrum of reporters and cameramen gathered from around the world, in a brief statement from the steps of the court.

His legal team now has 14 days to file an appeal.

Assange has denied the allegations, claiming they are linked to the release by WikiLeaks of hundreds of thousands of classified documents which have enraged governments across the world, especially the United States.

In February, a lower court ruled that Assange should be sent to face questioning by Swedish authorities over claims of sexual assault against two women, triggering a lengthy and bitter appeal battle.

The enigmatic WikiLeaks boss has been living under strict bail conditions, including having to wear an electronic ankle tag and observe a strict dusk-to-dawn curfew, at the east-England mansion of supporter and former army

The long-awaited decision, which has been deferred since the High Court heard Assange’s appeal in July, may not be the final chapter in the saga, but it will be difficult for either side to lodge an appeal.

The 40-year-old Assange has continually denied the allegations and claims they are politically motivated.

The former hacker caught the world’s attention when WikiLeaks released tens of thousands of classified diplomatic files allegedly obtained by a US serviceman who is now in prison in the United States.

But Assange also achieved a different kind of notoriety when the allegations of sexual assault were made against him by two Swedish women in August 2010.

In an autobiography published in September, Assange repeated his denial of the rape allegations.

“I did not rape those women and cannot imagine anything that happened between us that would make them think so, except malice after the fact, a joint plan to entrap me, or a terrifying misunderstanding that was stoked up

between them,” he wrote.

“I may be a chauvinistic pig of some sort but I am no rapist, and only a distorted version of sexual politics could attempt to turn me into one.”