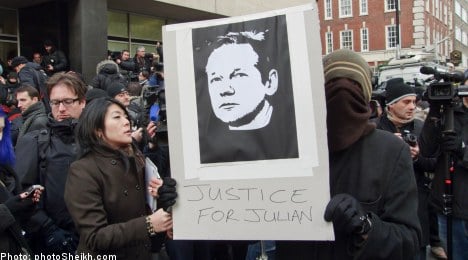 Here is a timeline of the whistleblowing website’s rise to prominence and subsequent attempts to clamp down on the site and extradite its founder:

Wikileaks.org is set up by a group of people including Assange, an Australian former computer hacker. Its aim is to let whistleblowers post sensitive documents on the Internet without being traced.

Wikileaks publishes a huge archive of text pager messages recorded in the US on September 11, 2001, the day hijackers crashed planes into the World Trade Center in New York and the Pentagon in Washington.

WikiLeaks releases a video of a US military Apache helicopter strike in Baghdad in 2007 which killed two Reuters employees. A 22-year-old American soldier, Bradley Manning, is arrested and charged with leaking the information.

The site publishes nearly 77,000 classified US military documents on the war in Afghanistan. The documents reveal details of civilian victims and supposed links between Pakistan and the Taliban.

The Swedish judicial authorities issue an arrest warrant for Assange on charges of rape. They later rescind the measure, but renew it the following month.

WikiLeaks publishes some 400,000 reports of incidents written from 2004 to 2009 by US soldiers, revealing torture by Iraqi forces and evidence that US forces turned a blind eye to it.

A Swedish prosecutor issues a European arrest warrant for Assange.

WikiLeaks starts releasing more than 250,000 classified US diplomatic cables, revealing the often frank assessments of American officials on a huge range of issues as well as the views of other governments.

Assange hands himself in to police in London and is placed in custody pending a ruling on the Swedish extradition request.

Assange is released on bail and tells journalists the Swedish rape allegations are part of a smear campaign against him. Under the bail conditions, he must live at a supporter’s country mansion in eastern England.

A British judge rules Assange can be extradited to Sweden, rejecting claims that the Swedish prosecutor had no power to issue the European arrest warrant and that the allegations did not amount to extradition offences.

The decision followed a three-day hearing earlier in the month, when lawyer Geoffrey Robertson said Assange would face a “flagrant denial of justice” if extradited.

Assange begins his appeal against the extradition ruling. A decision is delayed until November.

An unauthorised biography of Assange hits the shelves in Britain despite his efforts to stop its publication. It is based on hours of interviews he gave to a ghost writer, and includes a strong denial of the allegations.

“I did not rape those women and cannot imagine anything that happened between us that would make them think so, except malice after the fact, a joint plan to entrap me, or a terrifying misunderstanding that was stoked up between them,” he wrote.

Assange announces that WikiLeaks is suspending publishing classified US diplomatic files to focus on fundraising, after losing 95 percent of its revenue following a financial blockade imposed by Visa, MasterCard and others.

Two High Court judges reject Assange’s appeal against his extradition on all four counts. He now has 14 days to decide whether he will try to take the case to the Supreme Court, although leave to appeal must first be granted.