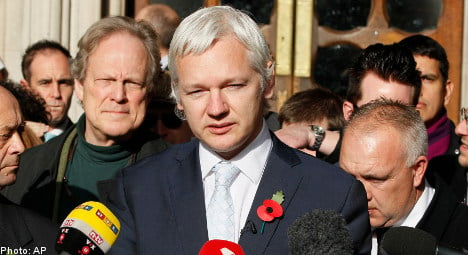 “They feel a certain degree of relief,” lawyer Claes Borgström told the TT news agency shortly after Assange lost a bitter legal battle to block his extradition to Sweden.

“It has been very trying for them to live with this uncertainty, especially since they themselves have found themselves attacked,” he said, referring to allegations spread especially on social media that the women’s accusations were motivated by secret agendas aimed at bringing down WikiLeaks.

Two judges at the High Court in London rejected Wednesday arguments by the 40-year-old Australian, whose anti-secrecy website has enraged governments around the world, that his extradition would be unlawful.

Swedish prosecutors want to question Assange on suspicion of two counts of sexual molestation and an accusation of rape made by Borgström’s clients in August 2010.

“He has really been grabbing at every straw, and frankly I don’t understand why he is acting like this. Maybe he has had bad advisors,” Borgström suggested of Assange’s refusal until now to return to Sweden for questioning.

“This was not unexpected, but it was of course bad news for Assange,” he told TT, adding he did not yet know if his client would appeal the verdict to Britain’s Supreme Court.

Assange has 14 days to decide whether he will try to take the case to the highest legal authority in Britain.

Hurtig meanwhile insisted that Assange had never been unwilling to travel to Sweden, but that “he doesn’t want to be taken into custody.”

He also brushed aside vocal criticism since the case came to light of the Swedish judicial system, insisting it “generally holds a very high standard.”

Petter Asp, a professor of criminal law at Stockholm University, agreed that most criticism of the Swedish legal system was based on a “misunderstanding” adding that Assange would “definitely” receive a fair trail should charges be filed.

“Lots of the discussion about Sweden’s legal system has been based on misleading information,” he told The Local in reference to claims made by Assange supporters that the criminal probe is simply a result of overly broad sex crime statutes in Sweden.

“We do have a concept of rape which is perhaps wider than the label applied in other countries,” he said.

“But it’s not a question of criminality. The offence would simply be called something else, be it assault, molestation or some other classification.”