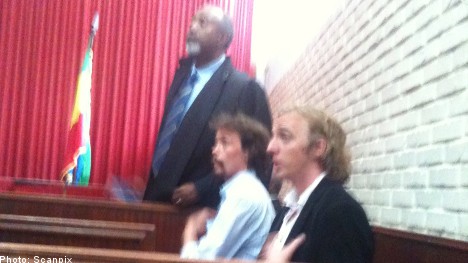 Freelance reporters Johan Persson and Martin Schibbye will answer to charges of supporting a terrorist group, carrying a sentence of up to 15 years in jail, as well as entering the country illegally.

“Charge three, participating in a terrorist organization, has been

dropped,” Judge Shemsu Sirgaga told the courtroom through an interpreter.

“They have to defend themselves against two charges: supporting a terrorist group and entering the country illegally,” he added.

Persson and Schibbye were arrested on July 1 in Ethiopia near the Somali border, and are accused of entering the country with members of the outlawed rebel group Ogaden National Liberation Front (ONLF).

Last month, they pleaded not guilty to charges of terrorism but admitted entering the country illegally.

This week, the prosecution opened its case against the Swedes, presenting witness testimony and video evidence of them travelling in the region.

The judge ruled Thursday the evidence was sufficient to allow the charges to be sustained.

“The public prosecution has established they were caught marching into

Ethiopia,” he said, adding the Swedes had tried to meet ONLF leaders and tried “to promote the terrorists.”

On Wednesday, the prosecution presented two-hours of raw video footage of the pair travelling in the region, with about 20 minutes of edited footage produced for Somali television.

In the raw footage, with no audio, the Swedes are seen holding machine guns. In the edited version, a gunshot can be heard as Persson holds up the gun.

Two Ethiopians of Somali origin accused of terrorism alongside the Swedish journalists are expected to receive a verdict Friday, having told the court they had no defence to present against charges of belonging to the ONLF.

The ONLF, formed in 1984, has been fighting for the independence of the remote southeastern Ogaden region, populated mainly by ethnic Somalis, which the rebels say has been marginalised by Addis Ababa.

Oil was recently discovered in the area, bringing new promises of wealth as well as a greater threat of conflict. 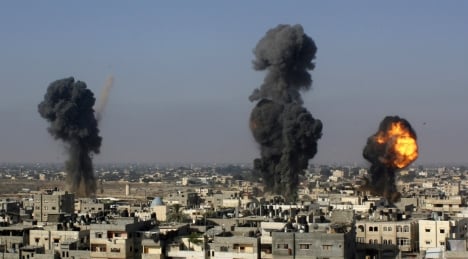