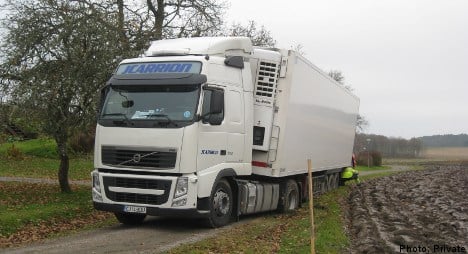 And it wasn’t the first time, either.

The Romanian driver, working for a Spanish trucking company, told Rubinstein that he came from Norway and was heading to Gothenburg.

“It all went a bit crazy,” said the man, who spoke very little English, to local paper Bohusläningen.

He was driving by GPS, he explained, and that’s what led him into the one-way gravel strip.

“They follow their GPS, but that isn’t always accurate. You need to think as well. Is it reasonable that this gravel road is the way to Gothenburg?” Rubenstein told The Local.

Although technology is great, you can’t put all your eggs in one basket, Hans Rubenstein argued.

Because of the unexpected visitor, he found himself listening to the humming noise of the truck’s chillers, necessary to keep the fish cold, throughout the night.

He was worried the truck was never going to get towed.

However, Rubenstein also knows that the truckers can’t solely be blamed.

“Nowadays, trucking companies aren’t interested in quality and safety for their drivers. It’s all about making it as cheap as possible, so these people are driving under very tough conditions,” said Rubenstein, who has been in the transportation business himself.

And since comprehensive road works started in mid October on the main freeway in the area, Rubenstein feels it is the private citizens are getting stuck in the middle.

“They [the truckers] don’t have a lot of money, and bad insurance policies with no roadside assistance,” he said.

Because of this he has had to pay for the damages to his driveway himself in the past, even after speaking to the company’s administration.

“I got 50 Euro, and the company told me they’d send the rest, but they never did.”

However, on Thursday the truck finally got towed, and Rubenstein later managed to get hold of the driver’s company and will be reimbursed for the damages the truck did to his property.

He has also been promised by authorities to get help putting up a sign which might keep the next driver from turning into his driveway.