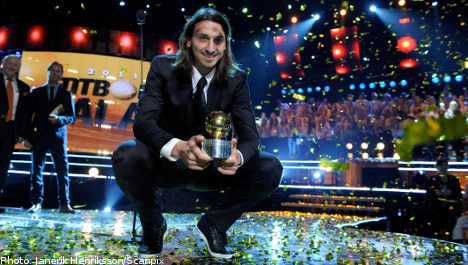 “I hope to win two more,” the 30-year-old striker said after his win, sporting his trademark wide grin.

Despite dominating the award for most of the last decade, the former Malmö, Ajax, Juventus, Inter and Barcelona player was visibly nervous before the award was announced.

“It is hard to describe. I think one has to have done it oneself in order to understand. It feels huge,” Ibrahimovic said at a press conference after the guests at the glittering gala had dispersed into the Stockholm night.

Ibrahimovic, it has been reported recently, has begun to consider the end of his career, but on Monday night he claimed the fire in his footballing belly remains burning brightly.

“We have the passion, we love playing at the moment anyway, and that is what is important,” Zlatan explained, pointing out that he has two years left on his contract with Milan and intends to fulfil them.

“I will play on as long as I keep developing,” he said.

Zlatan, despite helping Milan to a first Italian championship in seven years and Sweden to the finals of Euro 2012 during the year, has come under fire recently in some quarters of the Swedish press.

His absence from the line up which overcame the Netherlands in the crucial final match of the Euro 2012 qualifying game gave cause to debate whether the team could do without their star and captain.

But while individually, it could be argued that he has had a fairly average season by his standards, the award of his fifth successive Golden Ball served to further underline his status within the Swedish game.

A newly published autobiography “I am Zlatan” has dominated the sports pages in the major Swedish dailies in recent days, with much of the focus being on his highly-publicised falling out with Barcelona coach Pep Guardiola.

“I thought it was my time to tell my story… Especially for my fans who go out there and buy newspaper in which 90 percent is not correct. Now they will get my story,” he said.

“It is 100 percent truth and comes from my mouth. As I said just go out and buy one, read one.”

Another notable winner from the evening was Lotta Schelin who won the Diamond Ball for best player in a year which has seen her won the Champions League and claim a bronze medal at the World Cup.

“I have never had a better season, so if there were to be one year I would get it it would be this year,” the Lyon and Sweden striker said.

Lyon midfielder Kim Källström won the prize for best goal of the year for his free kick against the Netherlands in the crucial final match of Sweden’s Euro 2012 qualifying campaign.

Former French star and current UEFA head Michel Platini was in Stockholm to present the lifetime achievement award, to Kurt “Kurre” Hamrin, who was one of the stars when Sweden reached the World Cup final in 1958.