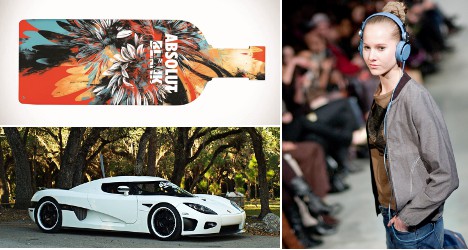 Here’s a list of ten Swedish products and brands you should also get to know if you don’t already. Related gallery.

Swedish fashion become synonymous with this rock inspired, old school brand in recent years. Its characteristic washed-out slim jeans with the unique skull label have spread widely across the world since Örjan Anderson and Adam Friberg founded the company in Stockholm in 2000.

Cheap Monday recently released its first ever shoe collection, and also sold a rather odd collection of jeans named “Customized by Nature” during a recent show in Paris. As the name suggests, a number of jeans were placed left outside to soak up mother nature’s harsh treatment and come out as 30 individual pairs of jeans.

Acne Jeans is slightly older than Cheap Monday, and another popular fashion export out of Sweden. It was founded in Stockholm in 1996 by a group of four, and has since been climbing steadily towards the group’s common goal to create a lifestyle of subtle luxury.

Founder and Creative Director Jonny Johansson, and Thomas Persson, editor for Acne’s own magazine, Acne Paper, were featured in the New York Times as their new store in the fashion metropolis started attracting new costumers.

For almost as long as the camera has existed, Swedish camera company Hasselblad has been in the photography business. In 1841, the first store opened up in Gothenburg, and 100 years later, Victor, a fourth generation Hasselblad, grew up to take a big step for the family business.

During World WarII, German surveillance planes flew back and forth over the Swedish border to Norway. Many crashed, and when Swedish authorities managed to seize a surveillance camera from one of the planes, the camera expert Victor Hasselblad was asked to reproduce it.

“No, but I can make a better one,” he allegedly responded. Months later, in 1941, the first Hasselblad factory was established, producing their first camera, the HK 7, for the Swedish military.

Today, Hasselblad is known as an exclusive and luxurious optics brand, making cameras, scanners and accessories for the thick wallets, such as the H4D Limited Edition Ferrari camera, priced at €21,499 ($30,000).

Someone looking for a “safe family car” will most likely stumble across Swedish machines such as Volvo and Saab. But let’s be honest, those brands both have seen better days.

However, there is another car brand that might not commonly be pinpointed to Sweden, which has completely different features.

Since enthusiast Christian von Koenigsegg founded the company in 1994, he has been working towards creating the perfect super car, building only a few individual cars each year.

One of the standing world records for Koenigsegg is held by its model Agera R for going 0-300 km/h in 14.53 seconds. Forbes magazine praised another Koenigsegg model as one of the top 10 most beautiful cars in the world.

“Uncomplicated yet modern clothes to suit every occasion.” That’s what the creators of Swedish fashion brand Filippa K had in mind when they formed the business in 1993.

Filippa Knutsson wanted to fill the gap she’d discovered on the Swedish clothing market, and left clothing store Gul&Blå to start her own business along with Patrik Kihlborg and Karin Segerblom.

Early on, Filippa K became a big national success in Sweden with the characteristic women’s stretch jeans. A few years later Filippa K Man was launched, and the success started to spread across Europe and North America.

WeSC, short for We are the Superlative Conspiracy and casually known as We, was founded in Sweden in 1999. At first flourishing mainly in street and skateboarding subcultures, a clever marketing scheme soon led to the brand becoming widely known internationally.

Instead of regular advertising, We pretty much relied solely on famous actors and artists to wear, and thus promote their clothes.

Now the brand has stores in for example Tokyo, Paris and New York and is a global phenomenon, not least for its colourful and stylish headphones in an endless number of varieties.

One can assume that Absolut Vodka founder Lars Olsson Smith was thrilled when, in 1922, Swedes voted in the country’s first referendum not to issue a complete ban on alcohol, roughly 40 years after his groundbreaking liquor was introduced.

Swedes seemed to have been left unconvinced by the campaign for prohibition, which featured a man passed out with a bottle in hand in front of his devastated wife and kid. Instead, fun-loving Swedes were more swayed by the warning about loosing their nubbe (shot of schnapps) for traditional crayfish festivities which Swedes hold very dear.

The good news allowed Absolut Vodka to grow increasingly popular, and in 1979, the company V&S Group completed what became a wildly successful launch on the American market. Six years later, Absolut Vodka was the most imported vodka in the US, and it is currently the third largest producer of alcoholic spirits in the world.

While Absolut vodka remains closely associated with Sweden, the brand was bought by French firm Pernod-Ricard as part of its acquisition of the V&S Group in 2008.

Whether your hobby is sowing, cooking, gardening or motocross, you will have no trouble finding a highly-esteemed machine produced by this legendary Swedish company.

Husqvarna was founded in 1689 as a weapons foundry for the Swedish military, and the logo was made to resemble the sight and barrel of the musket rifle.

Almost 200 years later, Husqvarna started making domestic appliances and sewing machines, and later on bikes and motorcycles. In fact, their motorcycles were used in the Swedish military and included option of attaching skis to the side for snowy winters.

The Husqvarna Group is currently the world’s largest producer of outdoor power products such as chainsaws and lawnmowers, and it was the first to introduce a solar powered robotic lawn mower.

One of the newer “brands” out of Sweden that have made it big internationally, is the extremely controversial website The Pirate Bay.

Launched in 2003, this tracker site was a pioneer within online distribution of digital media. However, its success would become too great for its own good, one might argue. In 2006, Swedish police raided their server halls and confiscated all their servers.

Three years later, the four founders of the site were sentenced to several stiff prison sentences and hefty fines for facilitating the violation of Swedish copyright laws. Nevertheless, the site is still a big actor in file sharing and has servers halls all around the world.

People have sniffed it, smoked it and chewed it, but Swedes were among the first to embed tobacco under their upper lips.

Not technically a brand, snus, also known as wet snuff, is a tobacco product invented in Sweden in the early 1800s, when tobacco was still a common crop to grow in the chilly country. Snus has had tough competition from both cigars and cigarettes throughout the years, but had a big upswing when reports started showing the harmfulness of smoking.

In later years snus increased in popularity in Sweden after smoking was banned in restaurants in 2005. American news show CBS 60 Minutes devoted an episode in 2010 to examining the Swedish product and its pros and cons compared to smoking.

While Swedish Match remains the dominant manufacturer of snus in Sweden and is attempting to market the product abroad, US tobacco companies have also begun to selling snus products inspired by the Swedish original.