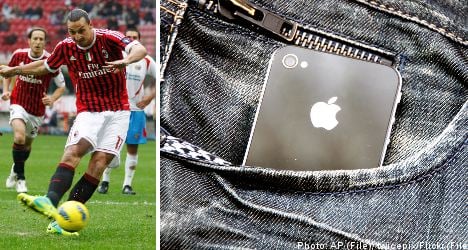 The police officer was on an undercover patrol when he encountered the 19-year-old, who was hanging around with two other friends, in the central parts of Malmö, the local Skånska Dagbladet newspaper reported.

The teenager approached the officer, said he was in the country on holiday, shook the officer’s hand and introduced himself.

Then the subject of conversation turned to football in general, and Swedish striker Zlatan Ibrahimovic and Barcelona in particular.

At one point in the conversation, the 19-year-old took hold of the officer to demonstrate to him how Zlatan kicks his opponents in the shins.

Soon after the teenager bid the officer a good evening and they parted ways.

A short while later the officer reached for his iPhone, only to realize that it was no longer in his pocket.

It dawned on the officer that the teenager must have pocketed the phone when showing off his footballing moves.

He contacted a colleague and together they activated the iPhone’s tracking function.

Several patrol cars moved towards where the three teenagers had been tracked down.

Despite the crafty teens having changed outfits, the officer had no problems identifying the Zlatan-fan.

The iPhone was later found in the pocket of one of his companions.

The teenager has since been charged with aggravated theft and the officer has also filed a second suit for the insult.

Despite being caught with the phone, the teenager has denied all allegations.