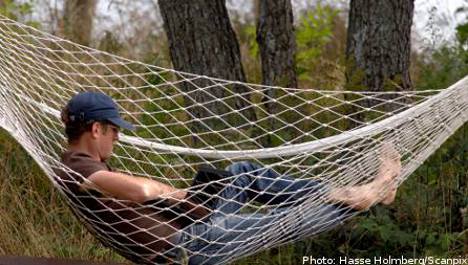 In a new series on The Local, readers are invited to have their say on a topic of the day or week, a perennial hot topic of conversation, or just a subject that engages, outrages or needs a broader airing.

First up this week is the evergreen issue of the Swedish work ethic, which has long caused consternation and evoked the curiosity of international workers moving to these northerly climes.

In a classic article on The Local from back in 2008, US native Doug Lansky, came to the conclusion that full-time Swedish workers could in theory claim up to 130 days off per year and pondered this encouraged a work-shy attitude.

Arguing from a distinctly different point of view, 28-year-old Stockholm resident Andreas Jonsson, argues in The Local this week that Swedish working life has become so status-stressed and careerist that it has left a generation unable to find satisfaction in their career choice mediocrity.

As the eurozone debt crisis continues to rage, the Swedish economy has been regularly held up as a pond of probity and health in a European sea of debt and decadence.

With national debt and unemployment levels relatively low, and GDP stable, is the Swedish work ethic a contributing factor, or a hindrance to greater growth, wealth and success?