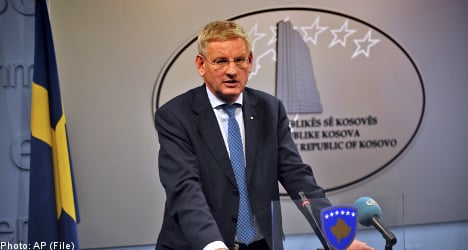 “Sweden is the country which is very supportive of the enlargement process as we think this is the best and the safest way for the prosperity and long-lasting stability of this region,” Bildt said after talks with his Serbian counterpart Vuk Jeremic.

However he warned the aspiring countries that the reforms necessary for their European integration are an “ongoing process.”

“This is not something to be solved in one goal or with one decision, it is a process that lasts,” Bildt cautioned.

“It is a long process and we should not have any ilusions it will be accelerated but the transformation of our society is in our best interest,” Jeremic said.

Western Balkan countries include all former Yugoslavia’s republics – Bosnia-Hercegovina, Croatia, Macedonia, Montenegro and Serbia, plus Slovenia which joined the EU in 2004, and Albania. They are in very different phases on their EU path.

The most advanced is Croatia, set to become the bloc’s newest member in

EU leaders should decide on the recommendations at their December 9th summit.