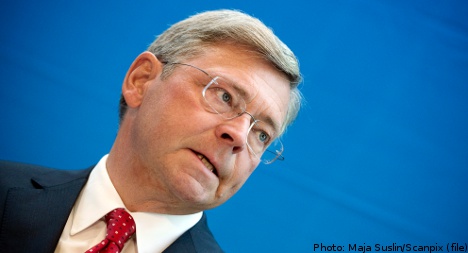 “We probably would have continued with a rental flat,” he said to the Svenska Dagbladet (SvD) daily and confessed to be “shaken” by the protest storm engulfing Nordea.

Sweden’s finance minister Anders Borg on Wednesday urged Nordea customers to change banks if the flat purchase had caused them to lose faith in the firm in which the Swedish state has an ownership stake.

“What has happened doesn’t increase confidence,” Borg said at a press conference on Wednesday.

Svenska Dagbladet reported last week that Nordea had purchased the 256-square-metre flat in central Stockholm at a time when the bank is set to make around 2,000 staff redundant.

The bank is furthermore planning to invest another 10 million kronor to renovate the flat, which is currently being used as office space.

The bank defended the purchase of the apartment, arguing it was a decision taken by the Nordea board of directors, something disputed by two union representatives who sit on the board.

According to union representative Steinar Nickelsen, who has been on the board since 2007, the question of purchasing a flat for Clausen was discussed, but not such a large and stately property as the one which was eventually purchased.

“It sends the wrong signals to spend so much money on an apartment when Nordea finds itself in its current situation with huge personnel reductions. We should have never made the purchase,” he told SvD.