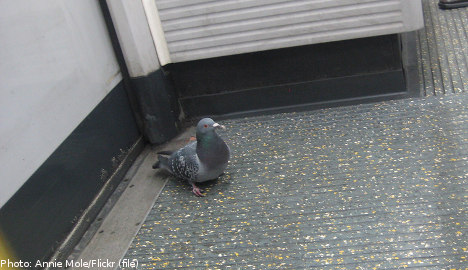 The pigeon in the picture is not one of those mentioned in the article.

”They stand calmly at the platform and wait for the subway train to arrive. When it does they get on, travel one stop, jump off and then head for their favourite haunts,” Rasmus Sandsten, press spokeperson for underground operator MTR, told The Local.

The pigeons are believed to live somewhere near Farsta Strand, in south Stockholm, and travel daily one stop to nearby shopping centre Farsta Centrum where there are many cafés and plenty of food to be found.

According to Sandsten, the most likely explanation is that one pigeon first got stuck on the metro by accident.

”Then, when it saw where it ended up it thought; ‘this was a great idea’. Sooner or later more of them followed suit,” Sandsten said.

However, the birds seem to choose other methods of transport for their return journey.

”We haven’t been told of as many incidents of pigeons on the tube on the way back, so we think they fly on their way back,” Sandsten said.

It is not clear how or when these pigeons first started to use public transport, but according to Sandsten, train drivers have said that they have seen pigeons using the Stockholm metro system as early as the 1990’s, when a similar pigeon gang regularly roamed the suburb of Hökarängen.

”And since then the birds have been spotted getting on the subway at stations all over Stockholm,” Sandsten said.

AT MTR, the policy among the drivers are to try to shoo away the birds if they happen to see one trying to get on, but not if it would mean that the departure of the train would be delayed.

Biologist Lars-Åke Janzon at the Swedish Museum of Natural History (Naturhistoriska Riksmuseet), told local paper Mitt i Söderort that although not especially clever, birds are very good at imitating each other’s actions.

Therefore, Janzon thinks that tube staff should persevere in their efforts to shoo the birds away, or he fears that the number of pigeons using public transport will grow significantly.

”People are scared of everything, And that will include an enterprising pigeon or two. Many believe they carry disease, but that’s not true. Not even their droppings are especially harmful. On the other hand, one might think it is sticky and disgusting if there is a lot of bird poo on the tube,” Janzon told the paper.

However, according to Sandsten drivers are seldom aware of the little stowaways before they get off at their destination.

And so far the company hasn’t received one single complaint from passengers about the freeloading birds.

”They behave well while on board and don’t seem to be making much of a mess. They also choose to travel later in the day, cleverly avoiding rush hour,” Sandsten told The Local.